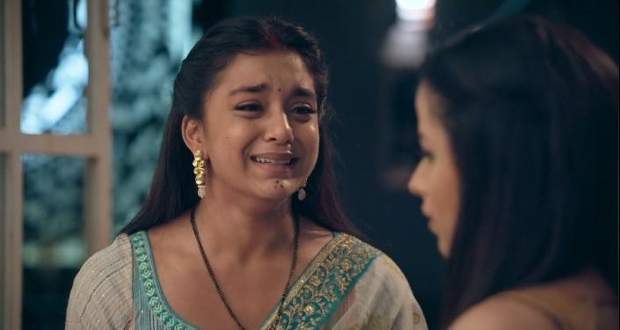 Today's Imlie 1st June 2022 episode starts with Imlie regaining consciousness while the nurse tells her to calm down as both her baby and the husband are fine.

Aryan asks Imlie how she is so brave and reveals to her that she has been promoted to the executive reporter of Bhasker Times.

Imlie laughs in happiness and reveals to Aryan that she is pregnant for real this time as she went to four different clinics and they all confirmed her pregnancy.

Later, in Aryan's hospital room, a doctor comes to him and tells him that due to his low sperm count, he cannot become a father and leaves after giving him the report.

Feeling confused, Aryan wonders how it's possible while Imlie is talking about the baby and showing pictures of the family to her tummy.

Elsewhere, Jyoti comes across the doctor as he reveals that there was a mixup in the lab and gives her the correct document stating that Aryan is not infertile.

Later, Sundar and Arpita bring gifts when Aryan suddenly comes there and stops them.

Jyoti imagines Aryan kicking Imlie out of the house but gets annoyed realizing that it was just a gift.

They all are amused while Jyoti wonders what she will do now.

Later, Aryan is on call when his infertility report flies and lands near Jyoti.

She questions him and tries to manipulate him but he reveals that he has gotten a report at a private lab and will get the reports by evening.

Further, Jyoti takes Aryan's phone with an excuse and finds out the name of the lab from which Aryan has gotten the fertility test done.

Afterward, Jyoti manages to change the reports and makes Aryan think that he is really infertile.

Just then, Madhav comes there with the special sweets from Pagdandiya but gets berated by Neela.

However, Imlie stands up for Madhav and jokes around with him as everyone else looks on.