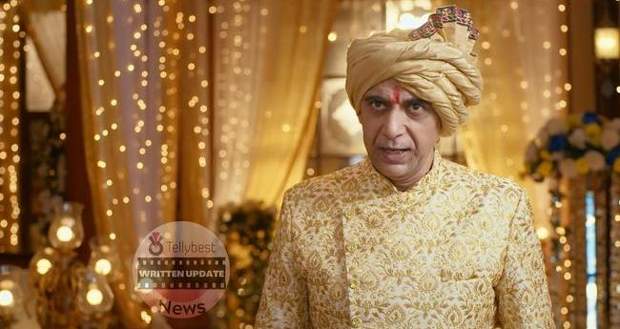 He apologizes to Imlie for being rude and asks why her heart is beating so fast.

Imlie blushes and stands up but the illusion of Atharva breaks.

However, Atharva does not believe him and accuses Imlie of being a fraudster.

Rudra glares at him and blames Cheeni for filling his head with nonsense.

Hearing Cheeni getting insulted, Atharva walks out of the house but Rudra threatens him to not leave the house else he is never allowed in the Rana mansion again.

Atharva declares that he will never come back to the house and put his foot out of the house.

In Rathore's mansion, Anu is talking to Cheeni who is waiting in the car for Atharva in the bridal lehenga.

Meanwhile, Rupi hears Anu’s conversation with Cheeni and confronts her for filling Cheeni’s brain with poison.

Rupi snatches the phone from Anu and Cheeni tells her that Atharva wants her not Imlie.

Cheeni talks out her frustration on Rupi and cuts the call.

Later, Imlie thinks she has done something wrong for Atharva to go out of the house.

So to take some advice, Imlie calls Cheeni but when she doesn't pick up she calls Sudar.

Worried Rupi takes the phone from Sundar and goes to the side.

Rupi asks Imlie where Atharva is and feels bad for Imlie when she says Atharva is out angry with her.

Unaware, Imlie does not know that Atharva is angry about the circumstances, not her.

Rupi urges Imlie to not give up on her relationship and maintain it successfully.

Afterwards, Imlie walks to Rudra and asks him about Atharva.

Rudra sits teary-eyed at Atharva’s actions but Imlie assures him that she will bring Atharva back.

Later, both Atharva and Imlie sit in different cars and drive towards Cheeni’s location.

On the other hand, Cheeni comes out of the car when she sees a groom misunderstanding him as Atharva.

Cheeni hugs him but hearing Jatin’s voice she removes his sehra.

She confronts him for coming there but he says thank you to Cheeni for not marrying him.

Cheeni insults Jatin and he looks at her with angry eyes and walks away.

Meanwhile, Atharva reaches Cheeni’s car while she has decorated the car’s trunk for their date.

Cheeni brainwashes Atharva against Imlie and Rudra so he does not change his side.

She blames Imlie for making rumours to keep Rudra against them (Atharva and Cheeni).

At the same time, frustrated Atharva picks up Imlie’s call when she calls him continuously.

Imlie requests Atharva for his location but he says he cannot tell her and cuts the call.

Just then, Cheeni hugs Atharva and declares she is only his and that she will prove it today.

© Copyright tellybest.com, 2022, 2023. All Rights Reserved. Unauthorized use and/or duplication of any material from tellybest.com without written permission is strictly prohibited.
Cached Saved on: Monday 21st of November 2022 04:09:22 AMCached Disp on: Tuesday 29th of November 2022 10:18:32 AM