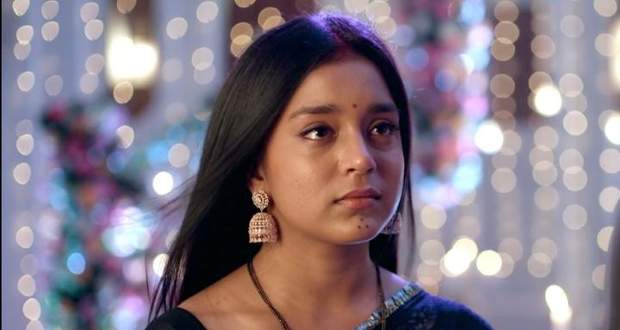 Today's Imlie 20th April 2022 episode starts with Aryan telling Imlie that she helped him find justice for Arvind while Imlie tells him that they should go to sleep.

Imlie tells Aryan that she doesn't have the energy to fight and orders him to sleep on the bed while he also agrees.

The next morning, Imlie calls Madhav and thanks to him for his help the previous day while Aryan comes there and asks Imlie what she is talking about.

Aryan comes closer to Imlie and tells him that her heart flutters, and she feels nervous whenever he is around.

Suddenly, Imlie asks Aryan for a job and says that it is for Madhav after which Aryan agrees.

Imlie tries to open the door and gets shocked to find it locked from the outside and shouts for help.

Arpita comes there and tells them that they can't go to work as she has planned a date for them.

Both Aryan and Imlie refuse and start arguing with each other while Arpita smiles seeing them bicker and leaves after giving them outfits.

Elsewhere, Aryan is on a call when Imlie comes there and tells him that she is ready.

Aryan stands speechless for a second seeing her adorning a beautiful black saree with her long straight hair flowing with the wind.

Suddenly, Aryan tells Imlie that they can't go downstairs and indicates to her that her strings of the saree are untied.

Imlie feels flustered while Aryan tells her to turn around and he will tie the strings.

Imlis hesitantly turns while Aryan touches her back smoothly and drags his fingers from the strings towards the center to tie them.

Imlie feels shy and shudders at the touch while Aryan looks into her eyes through the mirror.

Afterward, Aryan asks Imlie if she ever went on date, and Imlie jokes revealing that she hasn't been on a date.

Aryan gives her a mini date right there by telling her what the couple does as he pulls out an imaginary chair for her and pours an imaginary glass for her.

However, Imlie finds everything funny and laughs while Aryan looks at her sweet laugh.