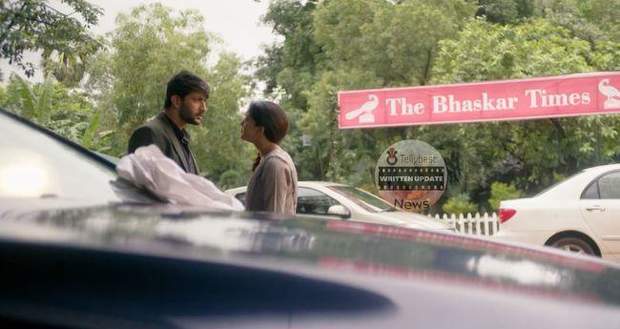 Today's Imlie 20th August 2022 episode starts with Malini calling the event manager and informing them that a report from a well-known media house is bringing a bomb with them.

Meanwhile, at the event, Imlie feels glad to be back in Bhaskar Times as she holds the mic in which Malini had put the bomb in.

Imlie gets stopped at the security as the alarm goes off but the security guards check her bag and think that it is from the toy in her bag.

Further, Imlie talks to Rinku the security guard while Rohit calls Malini and informs her that Imlie didn't get exposed at the security check.

Malini disconnects the call and asks Minu about Anu which reveals that Anu has gone to the same event as Imlie.

Back at the event, the Rathore family comes to the event and they get excited about seeing Imlie.

However, Aryan stops them saying that Imlie is not a celebrity.

Cheeni thinks to send Aryan toward Imlie and asks him for water.

Getting trapped in her plan, Cheeni reluctantly drinks two bottles of water that the family members have brought and spills the third one on herself.

Aryan goes to bring more water for Cheeni while she makes the family go to the front row where they bump into Anu.

Back at the water stall, Aryan saves Imlie from falling and argues why she came to which she replies that she is trying to save the Bhaskar Times.

Aryan gets angry at her and leaves with the mic that has the bomb in it.

Elsewhere, Minister enters the event as Cheeni is explaining the reason behind the flag hosting to Preeta in her humorous way.

The Minister gets impressed with Cheeni and offers her and Jaggu to hoist the flag with him on the stage.

On the other hand, Anu's saree gets mud stains due to Rajjo who is running by her.

Anu scolds her and insults her for being a villager while Imlie comes to the rescue and makes Anu leave Rajjo alone.

Further,  Imloe and Rajjo converse and bid each other goodbye after giving each other encouragement.