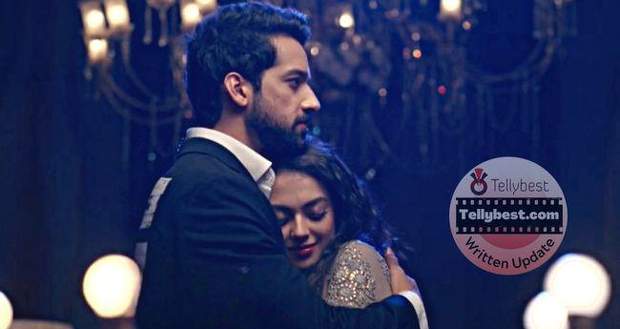 Today's Imlie 20th December 2022 episode starts with Imlie finally revealing to the Rathod family that Atharva loves someone else and not her.

They get shocked hearing it while Arpita asks her about the girl.

Imlie says that she does not have the courage to know the name of the girl that Atharva loves while Rupy looks at Sundar and takes Cheeni's name.

Imlie goes and brings the bracelet that fell from Atharva's pocket while Cheeni comes there and says that it's her bracelet.

Imlie asks her how as she found the bracelet in Atharva's pocket.

Cheeni gets shocked as she forms an excuse and says that she had given the bracelet to get it fixed by the jeweler for free.

Imlie believes it and leaves while the elders talk among themselves and hope that Cheeni is not the reason behind Imlie's sadness.

Atharva drives the car as he keeps recalling the words that Imlie had told him.

Meanwhile, Imlie cries as she stands on the balcony and talks into the air as she says that she will take back her smiles and her heart.

Atharva thinks that God helped him and tries to see it in a positive light.

Meanwhile, at the Rana house, Rudra asks about Imlie while Devika informs him that she has gone to her family's house since she was missing them.

Rudra gets a little curious as Atharva also didn't stay with Imlie and is also not at the dinner table.

Back in the Rathod house, Cheeni gets excited over all the gifts that Abhishek has sent her while Imlie comes there and asks her if she has something to tell her.

Cheeni gets shocked but plays it on and tells Imlie that she wants to talk to her Chikushek (Abhishek) and makes her leave the room.

Further, Anu comes there and Cheeni shows her the expensive gifts while Anu says that she should've stuck with Atharva as she would have gotten her peace and Malini's revenge that way.

However, Cheeni leaves saying that she will take revenge after enjoying her life.

Rudra tries to talk to Atharva about Imlie but Atharvs leaves from there after talking to him rudely.

Figuring out that the couple has been in a fight, Rudra states his concerns to Devika.

However, Devika explains to him that the couples get closer after each argument and tells him that it is Atharva's decision on whether he sees Imlie for the gem she is or not.

On the other hand, Anu calls Atharva and tries to convince him to bring Cheeni back into his life.

Anu tells him to do as she says and he agrees while Anu thinks that now her plan will go smoothly as Atharva has become her pawn.

© Copyright tellybest.com, 2022, 2023. All Rights Reserved. Unauthorized use and/or duplication of any material from tellybest.com without written permission is strictly prohibited.
Cached Saved on: Wednesday 25th of January 2023 05:14:04 PMCached Disp on: Thursday 9th of February 2023 04:49:46 AM