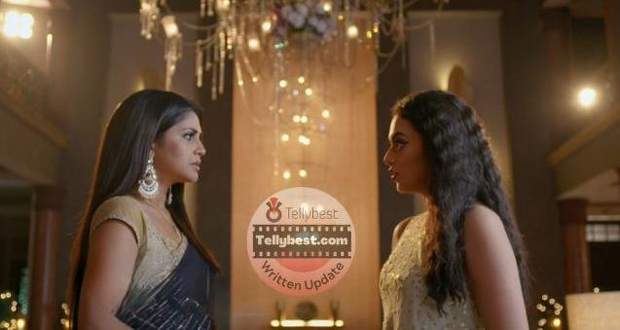 Today's Imlie 20th January 2023 episode starts with Imlie thinking that she will confront Cheeni and get her answers at all costs.

However, her car passes by Atharva's just then and she starts tailing it as she wonders where he is going when he is supposed to rehearse for his concert.

Cheeni sees Imlie's car and tells Atharva to drive faster as she is feeling very sick.

Cheeni makes Atharva drive through another road while Imlie gets stopped by a track coming in between.

As Atharva and Cheeni reach home they see Imlie's car is already parked.

Imlie gets out of the car and looks at Cheeni with accusing eyes while Atharva tells her that he was calling her only.

Imlie assures Atharva that she trusts him and questions Cheeni while the rest of the family comes out of the house too.

Imlie shows the nail she found and reveals to the housemates that Cheeni is the one who had set the house on fire.

However, Cheeni acts innocent and rushes to her room where she throws her phone angrily seeing Abhishek calling her.

Cheeni leaves her room while Rupi gets a call from Abhishek requesting her to get Cheeni to talk to him as they had a small altercation.

On the other hand, Atharva asks Imlie if she is upset with him but she looks away from him and continues saying that if he wants to move on, it has to be for himself only.

Cheeni gossips about her deeds to Anu who praises her while Rupi comes there and scolds Cheeni while warning her to not even go near Atharva.

However, Cheeni says that she can meet Arto as a friend while Rupi tells her to not come in between Imlie and Atharva.

On the other hand, Imlie tells Atharva that he will have to do things for himself and not be dependent on her.

Cheeni and Rupy argue while Rupi leaves stating that she will bring Imlie so that Cheeni can say all this to Imlie.

As Rupi and Imlie come their way, Cheeni recalls talking to Anu who told her to use her brain.

Cheeni sees the pelmet about to fall and pushes Imlie and Rupali away while getting injured herself.

The family rushes to help Cheeni and Rupali while Anu acts overly worried for Cheeni.

The doctor comes to check and further tells them that Cheeni and Rupy both need bed rest for several days to get better.

Further, Imlie is making lunch while Atharva comes beside her and asks her why she is making soup.

Imlie tells him that she's making it for Cheeni since she does not like Khichadi.

Atharva chides her for thinking of Cheeni while Imlie says that some people like being nice to others, even if the other person is mean to them.

As Imlie goes back to cooking, Atharva thinks to tell her about his and Cheeni's messages.