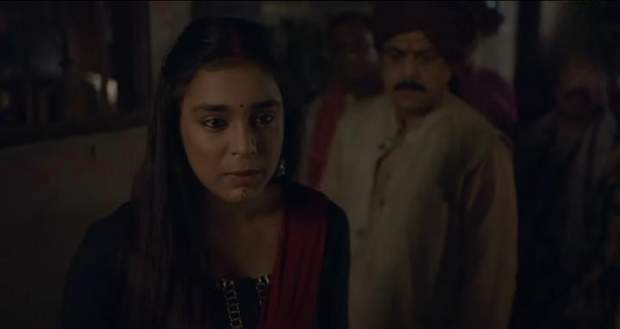 However, when Aryan doesn’t stop her, she goes up to him and says that she knows he won’t say sorry and she won’t apologise either.

Imlie kisses Aryan before going but he doesn’t kiss her back and clenches his palms into fists.

Imlie leaves through the door while Aryan watches her.

Meanwhile, Anu asks Malini where is her child and Malini says that her child has gone back to the God who gave her to Malini.

Anu tells Malini that Imlie and Aryan have separated and Malini starts laughing after hearing this.

When Imlie is sitting alone in a temple, she gets a call from her mother.

Mithi asks Imlie if she’s okay and Imlie tells her that she couldn’t even cry when her baby passed away.

Imlie tells about the entire incident with Aryan to Mithi and her mother says that Imlie still has a family who loves her more than anything in the world.

Imlie says that she will come home but not right now.

She hangs up the call and walks up to the idol of goddess Sita in the temple.

She breaks down while trying to communicate with the goddess and is frustrated that her God is not helping her today.

At that time, she hears a baby crying behind and she runs toward the baby.

It is little Gudiya lying there, who has been abandoned by Malini.

Imlie thinks that this is a sign from God and this is the direction in which her life is supposed to go.

Meanwhile, Malini burns a photo of Imlie and Aryan in the fire and thinks that this is the end of her goals.

However, Anu is planning bigger things for Malini and she thinks that this is not the end but the beginning of Malini’s story.

Five years later, in the village Pagdandia, an old man walks up to a shed asking for some water, in which a bunch of men are sitting and drinking.

He asks a man inside for some drinks and asks him how they bring all this stuff to the village when there is a drought in the village.

They tell him that they make this stuff by themselves.

When the old man starts to leave, someone stops him behind and it turns out that it was Imlie who had dressed up in an old man’s attire to carry out her sting operation and bust these villagers.

Imlie removes her wig and everyone points guns at her.

Meanwhile, the police comes outside and little Gudiya is standing outside laughing at the villagers who are going to get in trouble now.