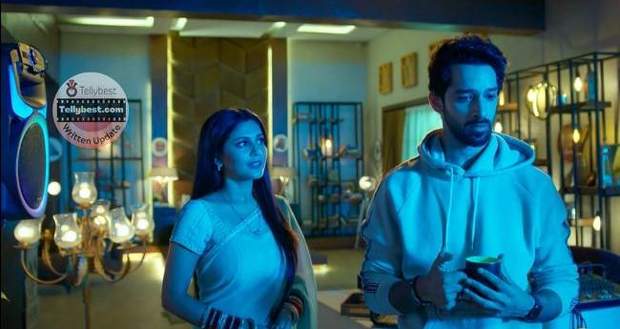 Today's Imlie 20th November 2022 episode starts with Imlie assuring Atharva that she will bring the producers to him.

Elsewhere, Rudra sits with Devika and talks about Atharva's music passion fading since he isn't scolding her.

Cheeni comes there and says that she agrees that Atharva's future resides in the office of Rana Industries offices.

However, Rudra says that he does not agree with her and tells Devika that they do not discuss things with outsiders.

Just then, the delivery of medicines comes and Cheeni asks who ordered it.

Imlie rushes there just in time and takes the medicine to her room while Cheeni realizes that Atharva is sick after eating the Daliya.

Imlie feeds the medicine to Atharva and leaves to talk to the producer while Cheeni slips into Atharva's room.

She questions him about how he has gotten so much protective of Imlie while he argues that it is because he knows Imlie is innocent.

On the other hand, Imlie rushes into the studio and requests to meet Mr. Mehta, the producer while the producer tells her that he will not listen to Atharva's demo anymore.

Back at the Rathore house, Anu comes there and collects all of Cheeni's luggage from the servants while Rupy argues that Cheeni is at the Rana house only for a few days.

However, Anu smiles as she says that nobody knows if Cheeni will stay there for a few days or forever.

Elsewhere, Imlie disguises herself as the driver while Mr. Mehta recognizes her and demands to stop the car.

Imlie however, convinces him to come to the Rana house with the promise of excellent food.

Back at Rana's house, Cheeni tells Atharva that Imlie will not be able to bring the producer as she can not even speak English properly.

However, Atharva says that he has hope when Imlie comes there in the driver's uniform.

Cheeni makes fun of her fashion sense while Atharva worriedly asks her if the producer agreed to come or not.

Imlie acts apologetic as she says that Mr. Mehta had waited for him for an hour, but surprises Atharva as she informs him that Mr. Mehta is downstairs waiting for them.

Further, Imlie goes to change her outfit while the Rana family takes care of Mr. Mehta.

Meanwhile, Imlie goes and gets the pen drive from the room.

However, the pen drive does not work and Cheeni smirks as a flashback shows her replacing Atharva's pendrive with an empty Pendrive.

Keya looks at Cheeni and feels that she is very cunning and smart.

© Copyright tellybest.com, 2022, 2023. All Rights Reserved. Unauthorized use and/or duplication of any material from tellybest.com without written permission is strictly prohibited.
Cached Saved on: Monday 21st of November 2022 12:47:50 AMCached Disp on: Friday 9th of December 2022 05:46:59 AM