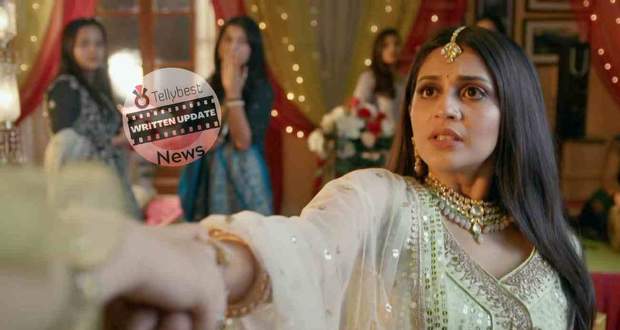 Today's Imlie 20th October 2022 episode starts with the big curtain falling on the guests when Atharva pulls the string of the tent accidentally.

The bowl of spinach paste and the stereos fall and everyone gets shocked.

In the corridor, hidden inside the curtain Cheeni grabs Atharva's collar and looks at him seductively.

However, Atharva blames Cheeni and sarcastically says that she will tell Imlie the truth in the marriage mandap.

He tells her he is going to tell Imlie the truth right now but Cheeni stops him from acting like a victim and requests him to wait.

In the hall, Anu taunts Arpita for organizing a bad party but Imlie tells everyone can dance with their heart’s voice.

Everyone wears earphones and dances to the songs and saves the day.

Meanwhile, Rudra and Devika get impressed with Imlie again.

At the same time, Imlie sees Atharva and Cheeni for a split second when they are going to the room.

Atharva holds Cheeni in her hand and she put mehndi of her name on his hands while Imlie is coming towards the room.

Cheeni pushes Atharva and goes out while Atharva grabs her hand from outside and asks her to meet him at his house.

Atharva thinks he is talking to Cheeni but Imlie is standing on the other hand.

He pulls the curtain aside and gets shocked when he sees Imlie and stumbles and falls on her.

At the same time, Anu, Rupi, Arpita and Narmada come while Atharva and Imlie stand up.

Arpita sees the smeared mehndi on Imlie’s hand and tells everyone that Imlie’s mehndi is done by the groom himself.

Meanwhile, Cheeni's teary eye glares at Atharva and he goes to pacify her.

At the same time, Imlie thinks that she needs to go meet Atharva at his house as he called with such love.

Later, Atharva calls Cheeni and tells her to meet him at his house or else he will come there from the main gate.

In Imlie’s room, Imlie tells Sundar about her dilemma of going to Atharva’s house and Sundar helps her.

Sundar says that Atharva is a DJ then he is also an RJ (Rathore Joshile) and he knows how to fulfil love while Atharva makes love songs.

At midnight, Cheeni is gone after putting pillows in her place while Imlie decides to wake Cheeni up.

In Rana's house, Kia and Akash lock the door and Atharva is locked in his room while Imlie is coming.

Outside the house, Imlie stands and thinks to ring the bell but banters with herself.

Meanwhile, Arto is making a rope from his bedsheet and hangs it down.

Imlie stands before the rope happily and says she will show Atharva her bravery.

© Copyright tellybest.com, 2022, 2023. All Rights Reserved. Unauthorized use and/or duplication of any material from tellybest.com without written permission is strictly prohibited.
Cached Saved on: Monday 21st of November 2022 07:07:22 AMCached Disp on: Saturday 10th of December 2022 02:24:16 PM