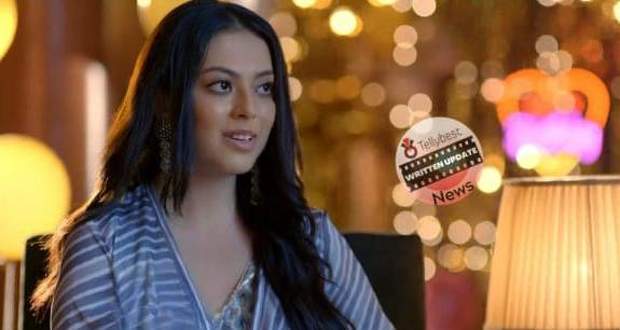 Today's Imlie 20th September 2022 episode starts with Imlie crying for not being able to persuade Narmada after so many years.

Meanwhile, Sundar consoles Imlie and advises her to be fierce like her mother.

Later, Imlie inaugurates the temple and walks toward Narmada to touch her feet but Narmada walks away with an angry expression.

At the same time, Rupi and Arpita's heart breaks at Narmada’s behaviour.

Meanwhile, Imlie goes to take blessings from Arpita and Rupi and Arpita blesses her to get a person who will love her like a treasure.

On the other hand, the DJ Arto concert starts and Atharva makes a grand entry on the stage.

In the temple, Imlie prays to god and takes a blessing from AryLie’s photo.

In the concert, Atharva is dancing with lots of girls on the stage while the fans chant his name.

On the other hand, Cheeni tries to sneak away from the temple but Ruby stops her and asks where she is going.

Panicked, Cheeni lies about going to another temple for Imlie’s birthday and Rupi orders her to take Imlie with her.

Cheeni gets furious as Imlie will get her late but she cannot refuse Rupi so she agrees to take Imlie with her.

In the car, Imlie opens the car window and smells the heavenly aroma of soil but Cheeni orders her to close the window.

However, Imlie praises the soil and informs Cheeni that air will lead her to the love of her life.

Reaching the concert, Cheeni makes an excuse of returning a wallet to her friend and removes her traditional clothes.

Meanwhile, Imlie is afraid of crowds and sits in the car waiting patiently for Cheeni.

On the other hand, Atharva tells his manager that the air in the morning told him to sing and there was something magical in the air.

At the same time, Atharva gets a call from his father and his father insults him for making a career out of his money.

In the car, Imlie gets worried about Cheeni and goes inside the club but the bouncer stops her because of her ethnic wear.

However, Imlie makes him understand the importance of their Hindi language and goes inside.

At DJ Arto's backstage, scared Imlie recites a poem to get some confidence and Atharva gets infatuated listening to the poem and decides to find the woman behind the voice.

Atharva comes out of his room and he is facing his back towards Imlie while she is looking for Cheeni.