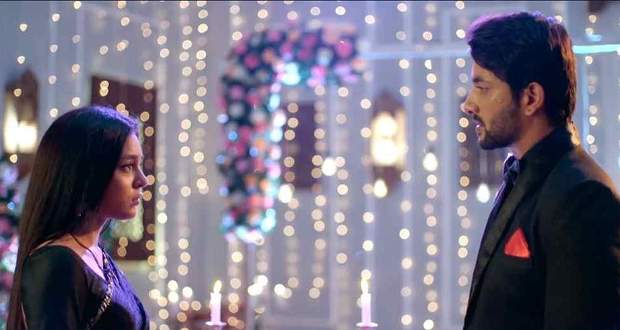 Today's Imlie 21st April 2022 episode starts with Aryan asking Imlie if he can have a dance with her while she smiles at him and asks for music.

Aryan moves his fingers in the air and a song comes on after which Aryan and Imlie dance with each other.

Both Imlie and Aryan lock eyes with each other as their faces keep coming close when they suddenly get startled by a knock on the door by Arpita.

They both go downstairs to see the house decorated for their date as Arpita takes them to a candlelit table.

Arpita tells them that they can't fight and leave while Aryan pulls Imlie's chair and helps her sit.

Later, Imlie teases Aryan saying that he looks nervous as if it is his first date while he says that the girls would fall in love with him after the first date.

Aryan takes counting his steps and holds Imlie's hand softly while making her stand up from the chair.

Secondly, Aryan compliments her eyes and comes closer to her saying that he loves the passion in her eyes to do the right thing.

Aryan leans more close to her and holds her cheek while Imlie closes her eyes anticipating Aryan's lips to touch hers.

However, Imlie opens her eyes after not feeling anything as Aryan tells her that he'll say the third step later.

Imlie panics and starts accusing him of kissing many women indirectly.

Aryan doesn't understand her argument with her while almost confessing to her that he loves her.

However, before they can say anything to each other, they hear Neela's shouts and go to the hallway.

Neela accuses Sundar of stealing and calls him a lowlife greedy servant while Arpita and Imlie defend Sundar.

Aryan asks for the jewelry and Neela shows her bangle but Imlie proves that they are fake and also that Neela keeps her jewelry locked away in the locker.

Neela acts as being forgetful and Aryan scolds her while Imlie goes after Sundar to check upon him.

Imlie asks Sundar if he is okay when Arpita comes there and apologizes to Sundar but he leaves informing her that he is a servant at Tripathi's house and leaves.