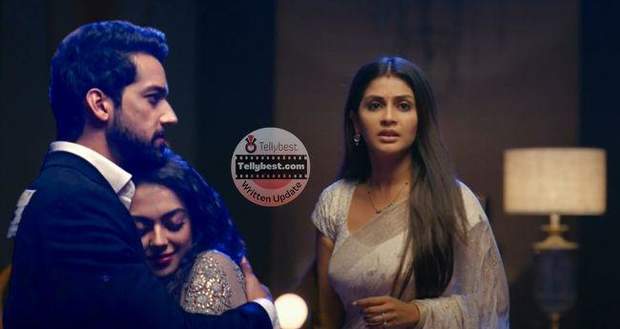 Today's Imlie 21st December 2022 episode starts with Atharva telling Anu that he will do whatever she asks of him to get back Cheeni.

Further, Anu pulls out another phone and messages Cheeni that a reservation for her has been made at Hotel Lily.

Cheeni gets excited thinking that it is from Abhishek and gets ready to go out.

On the other hand, Imlie stands in front of the temple and says that for the first time, she is seeing lies mixed with truth from Cheeni and needs to find out the whole truth.

She sees Cheeni leaving and follows her while apologizing to her parents in her head for questioning Cheeni.

As Cheeni is driving towards the hotel, she sees Imlie's car following her and forms an idea.

She starts swifting the car while Imlie tries to follow after her but hits some nails which causes her tire to puncture.

Further, the car gets out of control and Imlie hits the car on a tree to save a lady from being hit by the car.

Imlie tries fixing the car while Atharva passes from the road but doesn't stop the car after not seeing anyone inside the car.

Cheeni continues fixing the car and tries to see if it is working or not.

Meanwhile, at Rana house, the family gets bored and plans to go out to dinner.

Elsewhere, Atharva reaches the hotel and calls Anu seeing the lavish reservation made for him and Cheeni.

He says that she didn't have to do that while Anu tells him to do his part of the work and thinks that Cheeni wants his property, not his 'heartfelt' emotions.

Atharva thanks Anu and disconnects the call while he keeps thinking about Imlie and says that he needs support from his friend right now.

He tries to call Imlie but the call doesn't go through while Imlie is also trying to call but there is no network in the stranded area.

Some goons start eve-teasing Imlie and going after her while she runs to get some help.

Fortunately, a car stops in front of Imlie, and the goons escape while Abhishek comes out of the car.

He sees the injury and asks her if she's okay while giving her a bottle of water.

He insists on giving her a ride and talks to her on the way about him being in love and hopefully getting married to that girl.

Imlie requests Abhishek to drop her off at Hotel Lily and he pursues her to go to a chemist for her first aid before going to the hotel.

Cheeni reaches the hotel and gets excited seeing the reservation and the decorations.

Meanwhile, Atharva finally manages to call Imlie and she picks up the phone asking him why he's calling her.

He tells her that he was worried for her sensing she was in danger and further apologizes to her.

However, she tells him that she will need time to heal the wounds that he has given her and asks him where he is.

Atharva lies to her that he is at the studio and she disconnects the call while stating that she can live with the tears after knowing the truth but will not live with the fear of suspicion.

© Copyright tellybest.com, 2022, 2023. All Rights Reserved. Unauthorized use and/or duplication of any material from tellybest.com without written permission is strictly prohibited.
Cached Saved on: Friday 27th of January 2023 05:12:23 AMCached Disp on: Wednesday 1st of February 2023 09:45:00 PM