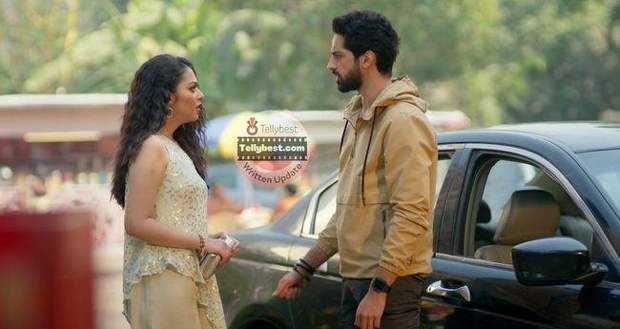 Today's Imlie 21st January 2023 episode starts with Atharva trying to talk to Imlie about Cheeni but she refuses.

She tells him that she is not his teacher and will not listen to his life story while he tells her that she is at least his friend.

However, Imlie reminds him that she is his friend and not his life partner.

Further, Atharva acts upset when Imlie requests him to taste the Khichadi.

He tells her to not do this to him but she requests him to taste it for her.

Atharva looks into her eyes deeply and tells her that he cannot say no now and eats the Khichadi from her hands.

She asks him how it is and he tells her that it is just like her, simple and best.

Atharva tells her that she brings taste to everything she makes and that he is a fool to have not recognized it sooner.

Meanwhile, in the hall, the family members are talking about their doubts about Cheeni making the Pelton fall on her.

However, Shivani goes on a different tangent and blames Imlie while Rudra tells her to stop her bad habit of blaming Imlie for everything.

Atharva asks her if she's okay and Cheeni lies that Abhishek hasn't even called her once while she is in so much pain.

Atharva notices the soup Imlie made for her untouched and asks Cheeni if would like to eat together.

Cheeni gets excited asking if he is taking her to lunch but Atharva responds that he was talking about eating with the family.

Later, while Imlie is about to sit in her place next to Atharva, Cheeni sits there and apologizes while acting as if she can't get up because of her injury.

Cheeni apologizes for taking her place while Imlie tells her that her place is not limited to a chair only.

Imlie goes and sits on the sofa while Atharva also stands up and says that he is going to sit with Imlie.

Imlie and Atharva joke around while Cheeni gets jealous and messages Anu.

Further, Anu calls Imlie with a distorted voice and with the excuse of her not getting network, lures Imlie out of the house.

Meanwhile, Cheeni gets ready for her "date" with Atharva while she opens the door and gets shocked to see Abhishek standing there.

He apologizes to her and tells her that he talked to Imlie who suggested him to come to sort out their issues in person.

Imlie also comes there just then and tells Cheeni that she should get angry had she tried to ruin the relationship between her and Abhishek.

Further, Atharva tells Imlie to take the Sita Maiyaa's name and select one of the two fingers.

Imlie laughs asking if he's in a dilemma and selects one finger.

Atharva says that he was right in talking to her about the text message from Cheeni.

Atharva is about to talk to her about Cheeni and Abhishek but Cheeni says that she knows and that Abhishek is there to talk to Cheeni.

Before Atharva can talk about anything else to Imlie, Ginni comes there and takes her away stating that she needs to help in decorating the house for Lohri.

Meanwhile, Cheeni continues her argument with Abhishek and he leaves telling her that she should call if she wanted to sort out the argument between them.

Anu comes there and comforts Cheeni who is upset about Atharva and Imlie.

On the other hand, Imlie bumps into Atharva while carrying a plate of vermillion which smears his face.

Imlie jokes and calls him a monkey while Atharva also takes a handful of vermillion and throws it on Imlie.

However, the vermillion ends up on Imlie's hairline making them get out of their playful moment.