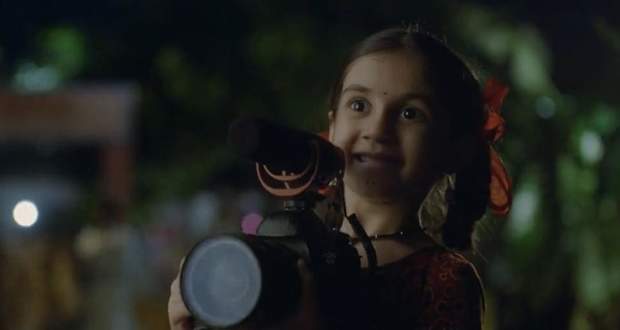 Today's Imlie 21st July 2022 episode starts with Imlie getting stopped by the goons as she starts fighting with them and removes her disguise.

At the same time, Aryan is at a fighting ground where the opponent named Tiger is beating him.

Back at the village, lmlie introduces herself as the reporter and shows the camera which the goons manage to break.

At the fighting ring, Aryan willingly gets beaten up while talking about a friend which confuses Tiger.

However, Aryan reveals that the friend he's talking about is death and knocks Tiger out in just one punch.

Back in Pagdandia, Cheeni blasts the sounds of police sirens to stall the goons which work as the leader sends one goon to go outside and check.

Cheeni stalls the goon while the police come there and arrest them while thanking Imlie for working as an independent reporter.

The ladies of the village also thank Imlie while the police inspector suggests Imlie join a big newspaper agency in the city.

However, Imlie avoids the topic and apologizes to the inspector saying that the evidence got destroyed.

Just then, Cheeni comes there and reveals to both Imlie and Inspector that she had fitted camera's in both Imlie's lantern and walking stick.

Further, Imlie scolds Cheeni for being out late at night while she reminds her to record a video for their news.

Imlie and Cheeni return home and as Imlie tries to put Cheeni to sleep, she gets asked about the city.

Imlie's memories of Aryan's harsh last words return to her bringing fresh tears to her eyes.

However, Cheeni notices the sadness in Imlie's eyes and asks her what is it about the city that makes her cry every time.

Meanwhile, Aryan returns home but gets stopped by Narmada who sees the wounds and gets worried.

Narmada tells him that she'll call the doctor but he refuses and leaves angrily.

Arpita comes to Narmada and comforts her as they discuss how Aryan's life has gone downhill since Imlie left.

Arpita angrily looks towards the direction Aryan left and says that Aryan ruined his life by himself by making Imlie leave that day.

Meanwhile, Aryan cleans his wounds as he recalls Imlie blaming him for the baby's death and accusing him of being a stone-hearted person.

© Copyright tellybest.com, 2020, 2021. All Rights Reserved. Unauthorized use and/or duplication of any material from tellybest.com without written permission is strictly prohibited.
Cached Saved on: Sunday 2nd of October 2022 05:37:38 AMCached Disp on: Thursday 6th of October 2022 03:48:40 PM