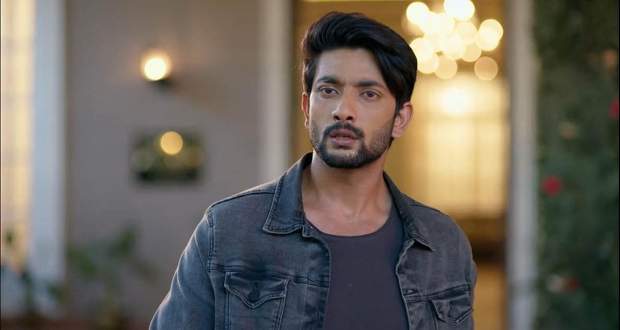 Today's Imlie 21st June 2022 episode starts with Aryan and Imlie on a phone call and him scolding her that she could have at least messaged him that she’s taking Madhav to the hospital.

He reminds her that it’s not good for her to take so much stress while being pregnant.

While she’s talking on call, Jyoti comes up from behind and hits her on the head making her unconscious.

Narmada tells Imlie to open her door but Neela doesn’t wait and barges right in.

Neela sees Kairi wearing men’s shoes and gets suspicious but Narmada convinces her to leave the room.

Jyoti and Harry take away an unconscious Imlie in panic while Aryan comes looking for her.

They see a morgue room in the hospital and Imlie there.

Aryan notices Imlie’s slippers outside that room and enters it but Jyoti and Harry try to hide away.

As he notices a piece of Imlie’s clothing and holds it, Jyoti and Harry manage to sneak out of the room, while Imlie is lying in one of the morgues.

Harry tells Jyoti that her game is over and she fights back and tells him to just do as she says.

Imlie gains back consciousness and struggles to get out of the morgue while shouting out for Aryan and seeking his help.

While he’s talking to Arpita about it they see someone’s shadow outside and consider it a thief who broke in with clothes covering their entire body.

It turns out that the thief was actually Neela who just covered herself in a blanket because she was cold.

They get up and start beating him.

Later, Aryan sees Madhav in the hospital and wonders where Imlie could be.

He goes around the hospital, showing everyone Imlie’s photo and asking if anyone has seen her.

Jyoti and Harry return to the house and try to cover their absence by saying they were at a temple praying for Aryan and Imlie’s good future.

Harry questions Jyoti’s actions but she fights back saying that whatever she is doing, she is doing it for her true love.

She gets happy thinking Imlie must have frozen to death by now and tells Harry to make a drink for her to celebrate.

Narmada questions Arpita about what kind of Pooja did Jyoti do all day.

They walk up to Jyoti and Harry’s room to find out and are shocked to see them drinking.

© Copyright tellybest.com, 2022, 2023. All Rights Reserved. Unauthorized use and/or duplication of any material from tellybest.com without written permission is strictly prohibited.
Cached Saved on: Monday 21st of November 2022 11:31:28 AMCached Disp on: Thursday 1st of December 2022 10:39:21 PM