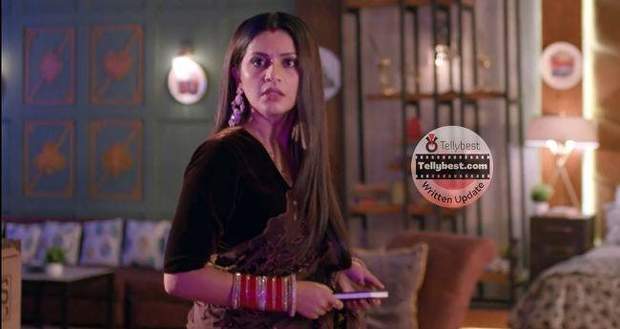 Today's Imlie 21st November 2022 episode starts with the pen drive not working and Atharva finding out that the pen drive is not his.

Meanwhile, Cheeni recalls replacing the pen drive with the wrong one.

Atharva requests the producer to wait for some time until he brings the right pen drive.

Imlie requests the producer to wait but Cheeni enters and urges Imlie to let the producer go as he is getting late.

Cheeni also points out that Atharva is looking pale due to a fever and he does not have sufficient energy to perform.

Hearing Cheeni’s words, Atharva also feels that he cannot do anything so he thanks the producer for coming.

Imlie interrupts him and declares that DJ Arto will do a live concert as music cannot be restrained in a pen drive.

Atharva gets shocked and tries to stop Imlie but she doesn't listen and runs away to the preparations.

Imlie brings lots of utensils of different sizes while everyone watches her confused.

Later, Imlie explains to the family member that everyone has music inside them so they need to support Atharva.

Atharva feels empowered and starts the beat and performs a melodious performance with subtle beats of the utensils.

The utensil's sound and Atharva’s voice go hand in hand and create a magical effect.

Meanwhile, Rudra enters and sees the performance with a grimace.

The performance finishes and the producer gives the contact to Atharva and promises to provide free tickets to the family.

Meanwhile, Imlie sees Rudra and runs to him to inform him about the good news.

However, Rudra tells Imlie that he is disappointed with her because he thought that Imlie will become the light in Atharva’s life.

Rudra walks away disappointed as he wanted Atharav to leave his singing career and join the family business.

Later, Atharva hugs Imlie and thanks her for helping him out and Cheeni looks at them with envious eyes.

Afterwards, Devika urges Atharva to take Imlie out on a date to show his gratitude for today's events.

Atharva takes up his mother's advice and walks to Imlie and invites her for a dinner date.

Meanwhile, Cheeni looks at them with glaring eyes and recalls Kia's words about losing Atharva to Imlie.

Later, Cheeni pulls Atharva into a secluded corner and sarcastically asks Atharva what he is wearing for his date with Imlie.

However, Atharva assures Cheeni that he is taking Imlie out for dinner to thank her.

He assures Cheeni that his heart belongs to her even if he goes to eat out with Imlie.

At night, in Cheeni’s room, Anu enters with Cheeni’s luggage and hugs her tightly.

Seeing Cheeni sad, Anu asks her if something is wrong as she expected Cheeni to put up a line of problems in Atharva and Imlie’s life.

However, Cheeni informs Anu about Atharva and Imlei’s dinner date.

As expected, Anu encourages Cheeni to create so many knots of confusion between Atharva and Imlie's life to break the thread of their relationship.

In Imlie’s room, Cheeni advises Imlie to wear a heavy saree and makes Imlie realize that Atharva is taking him on a date.

Imlie gets ready while Atharva leaves his office for his date with Imlie.

Later, Cheeni enjoys the shows as Atharva is undressed and Imlie is overdressed for the date.

© Copyright tellybest.com, 2022, 2023. All Rights Reserved. Unauthorized use and/or duplication of any material from tellybest.com without written permission is strictly prohibited.
Cached Saved on: Monday 21st of November 2022 11:27:00 PMCached Disp on: Wednesday 7th of December 2022 03:06:57 PM