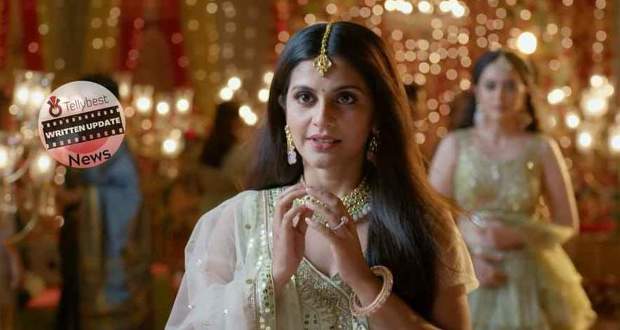 Today's Imlie 21st October 2022 episode starts with Imlie climbing up the rope made by Atharva to escape from his room.

However, he gets shocked when he sees Imlie at his window and screams her name and panics that she might fall.

Imlie stumbles and Atharva holds her waist and pulls her into the room.

Imlie lays on Atharva’s chest while he breathes heavily and asks her what he is doing here so late at night.

However, Imlie tells him how she could not come and he recalls the conversation back at the Rathore mansion.

Atharva feels guilty as he does not want to hurt Imlie and break her heart.

Meanwhile, Imlie recalls Sundar’s words of Rathore Joshile and she is about to confess her love to him.

However, Atharva’s phone rings with Cheeni’s name and he picks up the phone before Imlie can see Cheeni’s name.

Meanwhile, Cheeni sees the car collection of Rana’s excitedly and hugs the car while dreaming of roaming in them.

Atharva writes an “I love you” text to Cheeni while murmuring and Imlie misunderstands that he is also trying to confess his feelings to her.

In the parking lot, the car starts to beep after sensing Cheeni’s strange presence.

The alarm blaring wakes everyone up and Cheeni runs away while Imlie gets stuck in Atharva's room.

Imlie opens the door with Atharva’s debit card and impresses him with her skills.

They both sneak out of the corridor but Shivani comes and they hide behind a pillar.

However, Imlie enjoys every time Atharva holds her shoulder and follows his instructions.

Later, Rudra comes out in the corridor and Imlie and Atharva put a lamp on their head and act as a lamp.

Rudra gets a call and gets distracted so Atharva pulls Imlie underneath a staircase.

In the Rathore house, Rupi finds the real plate of mehndi on the kitchen floor and also finds the empty spinach bowl.

Rupi connects the dots and concludes that Cheeni did all the things to ruin Imlie’s mehndi function.

Meanwhile, Atharva and Imlie run out of the house laughing while he feels bad for lying.

When Cheeni enters her house Rupi confronts her with the spinach bowl.

Rupi asks Cheeni who concocted this plan but she does not accept her accusation.

Cheeni accuses Kia and Akash of having mischievous faces but Rupi scolds her.

She tells Rupi that she went out to search for Imlie and Rupi gets worried for Imlie's safety.

© Copyright tellybest.com, 2022, 2023. All Rights Reserved. Unauthorized use and/or duplication of any material from tellybest.com without written permission is strictly prohibited.
Cached Saved on: Monday 21st of November 2022 08:45:58 AMCached Disp on: Tuesday 29th of November 2022 12:18:42 AM