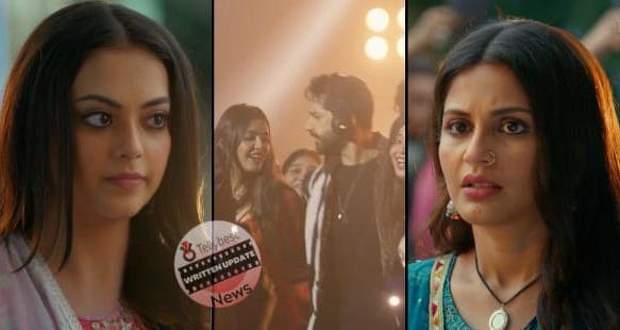 Today's Imlie 21st September 2022 episode starts with Atharva and Imlie standing with their backs turned towards each other.

Meanwhile, both turns slowly but Imlie’s dupatta flies from her shoulder and lands on Atharva's face.

When Atharva removes the dupatta Cheeni stands in front of Imlie covering her with her body and snatches her dupatta from Atharva.

Seeing Cheeni, Atharva gets frozen while she takes Imlie out of the concert.

Later, Cheeni scolds Imlie for coming inside and asks her to wait for her in the car and leaves.

At the same time, Imlie gets a call from Arpita but crashes into a man who drops a packet of drugs on the floor and picks up Imlie’s phone in a panic.

Meanwhile, the man sarcastically tells Imlie that the white powder is a headache medicine and innocent Imlie believes him.

In the concert, Atharva sings a song for Cheeni while Cheeni is enjoying and blushing.

However, Cheeni's friends inform her about Imlie getting arrested and Atharva gets worried seeing Cheeni leaving suddenly.

In Rathore's house, Narmada accuses Imlie of smuggling drugs and orders the family to not bail Imlie.

At the police station, Cheeni tries to bail Imlie but the police do not listen to her and Atharva reaches there to help Cheeni.

However, Imlie accepts the accusation thinking it's a headache powder and offers to get more powder from a shop.

Imlie's words shock everyone but Cheeni stops Imlie from making the situation worse by closing her mouth with her hand.

After watching the footage, the police release Imlie from all accusations.

In Rana's house, Akash (Atharva’s Elder Brother) informs his dad about Atharva visiting the police station but furious Rudra (Atharva’s Father) accuses both his sons of being selfish.

Akash’s wife gets angry at Rudra’s words and leaves and Rudra sarcastically advises Akash to pacify his wife.

On the other hand, Atharva offers Cheeni and Imlie a ride to their home romantically opening his passenger seat for them.

However, Cheeni glares into his eyes and sits in the backseat and Atharva smiles at her resistance.

Meanwhile, Imlie sits on the passenger seat and thanks him for saving her.

At the traffic signal, the eunuch blesses Atharva and Imlie to be a great couple and Cheeni laughs sarcastically in her mind.

© Copyright tellybest.com, 2020, 2021. All Rights Reserved. Unauthorized use and/or duplication of any material from tellybest.com without written permission is strictly prohibited.
Cached Saved on: Friday 30th of September 2022 05:33:08 PMCached Disp on: Saturday 1st of October 2022 12:07:49 AM