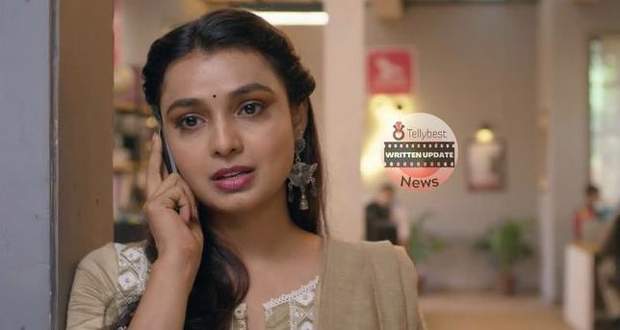 Today's Imlie 22nd August 2022 episode starts with Malini disguising herself as a security guard while Aryan is also in the same area looking for his family.

Malini notices him and turns her head suddenly wondering why everyone is at the event as it is troublesome for her.

Just then, Malini notices Anu and runs after her when she bumps into Imlie.

However, before Imlie can say anything, Malini leaves to go to Anu.

Malini goes to Anu and takes her away from the event telling her about the bomb.

However, Imlie overhears them and goes after them not knowing that they are Anu and Malini.

Further, Imlie takes the detection machine from Rinku the security guard and starts going around trying to find the bomb without causing a panic in the public.

Meanwhile, Malini tells Anu to hurry up as they will have only one minute after the mic is turned on.

After the flag hoisting, Imlie finds a signal on the detection machine and goes towards Aryan who is holding the mic when Cheeni comes there and takes the mic from him to sing the national anthem on stage.

Aryan sees Imlie's worried expression and asks her what's wrong to which Imlie informs him about the bomb in the mic.

Both Imlie and Aryan run to Cheeni who is on the stage and take the mic from her.

Further, they both run away from the public and then throw it together into the air saving all of them as the bomb blasts in the air and doesn't injure anyone.

Aryan holds Imlie close to her as they both get lost in each other's eyes and forget about the chaos happening around them.

However, Imlie notices the flag pole falling and rushes to save it from touching the ground as the people start causing a stampede.

Imlie formulates a plan and starts giving a speech on overthrowing the attacker's plans and celebrating Independence Day with glory.

Further, the minister praises Imlie's bravery and tells her that she will be remembered while Imlie states that she was only doing her duty as a citizen of India.

On the other hand, Anu notices Malini's missing earring and informs her while Imlie finds the missing earring at the event and thinks to herself that it belongs to the lady who planted the bomb.

© Copyright tellybest.com, 2020, 2021. All Rights Reserved. Unauthorized use and/or duplication of any material from tellybest.com without written permission is strictly prohibited.
Cached Saved on: Sunday 2nd of October 2022 04:37:47 AMCached Disp on: Wednesday 5th of October 2022 05:35:13 PM