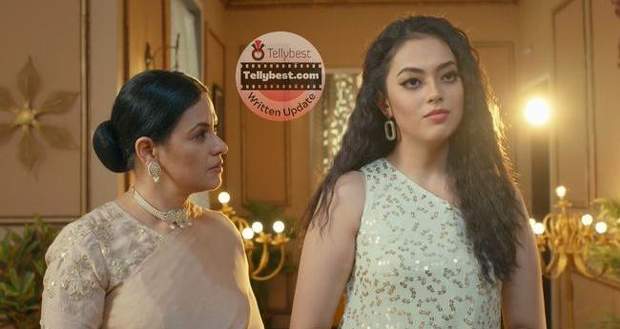 Atharva apologizes as the vermilion gets on Imlie's face while Imlie rushes to cover Ginni in paint too since she was laughing.

As Ginni leaves to wash her face, Atharva apologizes to Imlie.

She gets confused while Atharva points toward the hairline.

Imlie says that it is okay and leaves from there while hiding her tears.

Cheeni tells Anu to look at what is happening and gets jealous.

Meanwhile, Roopi is packing her bags while Sundar and Arpita are trying to convince her to stay while asking her why she wants to leave.

Rupi thinks that she cannot explain to them that Cheeni is become more cunning and continues packing her bags.

However, Devika and Rudra come there and convince her to stay while reminding her that Imlie is going to celebrate her first Lohri in the house.

The next day, all the housemates are ready for Lohri while Cheeni comes forward and states that she has a game for all of them.

The housemates agree to play a game while Cheeni explains the game to them where everyone writes a task and passes the chit while the music will play.

The person whom the chit will land on at the end of the song will have to do the task.

In the first round, Rudra has to sing a romantic song for the person he likes and he sings for Devika who feels flustered in front of everyone.

Afterward, Atharva has to kiss the person he loves the most in the room.

Atharva walks towards the sofa where Imlie and Cheeni are sitting making both of the anxious for different reasons.

Imlie hopes that Atharva does not come to her while Cheeni hopes for Atharva to come to her and confess to everyone that he is still in love with her.

However, Atharva shocks everyone as he goes to Devika and kisses her on the cheek stating that he loves his mother the most.

Being in a playful mood, Devika states that she loves someone else and kisses Imlie on the cheek.

Cheeni writes the chit in the next round which lands on Imlie.

Imlie reads Cheeni's chit telling her to meet on the terrace since she is still in love with Atharva.

Imli lies to the family that she has to dance on the terrace and leaves followed by Cheeni.

On the terrace, Imlie asks Cheeni what this is while holding up the chit.

Cheeni states that it is clearly written that she still loves Atharva.

However, Imlie says that it is hard to believe hearing the truth from Cheeni while Cheeni says that SHE truly loves Atharva.

Cheeni says that she does not care about money and status since she would have married Abhishek who is five times richer than Atharva if she wanted to be wealthy.

Imlie says that she thinks it is not so now because Cheeni's ego is hurting since Atharva started moving on.

However, Cheeni tells Imlie that she is there to tell her Atharva's truth too and tells her about the 'I miss you' message and the times when Atharva came to rescue/meet her.

She asks Imlie if Atharva told her any of this and Imlie refuses.

Cheeni fakes pity on her saying that she thought Imlie and Atharva were friends now.

Meanwhile, the family inside the house gets worried but Sundar tells them to start preparing for the pooja since the sisters will sort out their drama.

Back at the terrace, Cheeni smiles evilly as she tells Imlie that all these actions and the attention that Atharva has given her, proves that he is still in love with her.