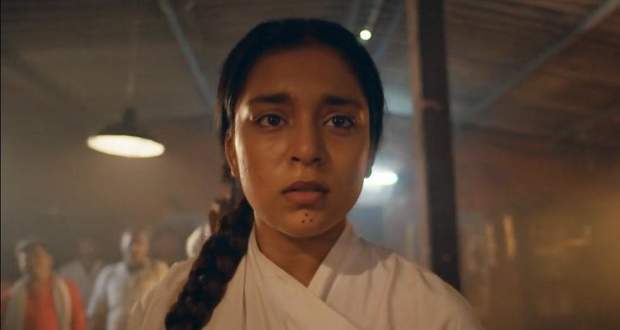 Today's Imlie 22nd July 2022 episode starts with Aryan remembering Imlie while he cleans up the painful wounds on his face.

Suddenly, Arpita's son Jaggu comes and his plane crashes with a box kept in Aryan’s room.

Imlie and Aryan’s photographs sprawl all over the floor while Aryan screams angrily, asking who has still kept these photos.

Arpita says it is her and tells Aryan to stop running away from his past.

When Arpita states that Aryan still loves Imlie, he lights up all the photos with fire, to prove he hates Imlie now.

However, Arpita is no fool and says after this incident, she knows that her old Aryan is very much alive but in denial.

Meanwhile, Preeta calls up Malini and asks when she will get Preeta married. However, Gudiya is worried about Imlie's re-entry into Aryan's life.

Malini says even if Imlie somehow stumbles back into Aryan’s life, she wants to make sure her happiness is permanently locked.

She is more interested in being an equal shareholder in Bhaskar times.

In Pagdandia, Cheeni wakes up beside Imlie hearing a lot of noise outside.

When Imlie goes outside to check what is happening, she sees the Sarpanch forcing Binni to marry a guy she does not like.

This instantly reminds Imlie of how she was treated years ago in the same way.

Telling Cheeni to climb up the tree and record everything, Imlie asks Sarpanch to let go of Binni as she is innocent.

However, the Sarpanch asks for proof, including the guy who says Binni started flirting with him too by waving her Chunari at him.

Imlie gets angry and slaps him saying it is because of the guys like him that girls have to hide behind their chunaris.

Imlie then says what if Sita from Ramayana was here, would the villagers ask her for proof like they are asking from Binni.

Sarpanch joins his hands and says he cannot deny Sita Ma’s existence and asks the villagers to hand over the guy to the police.

Binni thanks Imlie while Cheeni asks Imlie if she is thinking about Rathore’s.

Imlie says she is over the pain and it cannot even affect Cheeni too.

© Copyright tellybest.com, 2022, 2023. All Rights Reserved. Unauthorized use and/or duplication of any material from tellybest.com without written permission is strictly prohibited.
Cached Saved on: Wednesday 25th of January 2023 11:34:34 AMCached Disp on: Thursday 9th of February 2023 08:09:27 AM