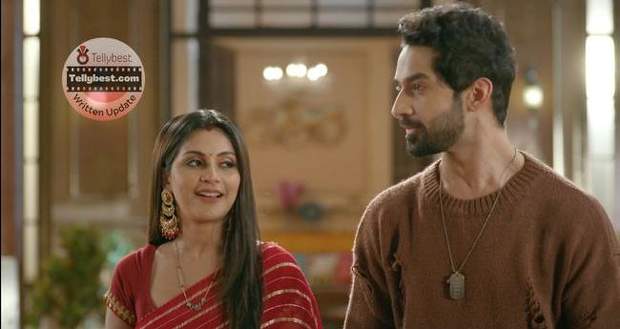 Today's Imlie 22nd November 2022 episode starts with Cheeni telling Imlie to get ready while she will help her afterward.

Once Imlie leaves, Atharva comes there and Cheeni acts sick in front of him telling him that she is happy to see him there.

Cheeni tells Atharva to leave now so that no one suspects their true love.

Afterward, Cheeni helps Imlie in decorating the house for her date with Atharva and smiles thinking that her plan will destroy Imlie.

Later, Imlie is pacing the room trying to calm her nerves when Atharva comes there and they share a longing look.

Atharva tells Imlie that she is spoiling him and tells the waiter to bring a list of foot items.

Imlie gets shocked as it is all of her favorite food and Atharva tells her that for once he is going to take care of her.

However, Imlie goes upstairs while Cheeni comes forward and starts her plan.

Cheeni drops a bottle of water near the live wire while Imlie goes to switch on the lights for the surprise.

However, Atharva sees the live wire with the spilled water nearby and shouts at Imlie to not turn on the lights.

He starts scolding Imlie for being careless while telling her that this is not a date and that he was just trying to thank her for getting the project.

Keya and her husband look at the expressions of all three and smirk thinking that Cheeni is more cunning than they thought.

Meanwhile, Rudra overhears Cheeni talking to Anu about Atharva as if he's a money-making machine and enters her room.

Cheeni acts innocent and laughs as she becomes real and tells Rudra that soon enough Imlie and Atharva will be separate and he will be welcoming her as the daughter-in-law.

After Rudra's scolding, Imlie comes there and asks him what he is doing in Cheeni's room.

Rudra lies to Imlie that he was just checking up on her and asks what happened between her and Atharva.

Cheeni once again interrupts them and tells Rudra that Imlie and Atharva are upset with each other and not even talking to each other.

However, Rudra encourages Imlie by telling her that he believes in her and that she should forgive Atharva for he must be the one who made the mistake since he is the husband.

Imlie smiles at Rudra's advice and leaves from there happily while Cheeni gets frustrated seeing her plan failing.

© Copyright tellybest.com, 2022, 2023. All Rights Reserved. Unauthorized use and/or duplication of any material from tellybest.com without written permission is strictly prohibited.
Cached Saved on: Tuesday 22nd of November 2022 11:30:32 PMCached Disp on: Friday 9th of December 2022 04:13:50 AM