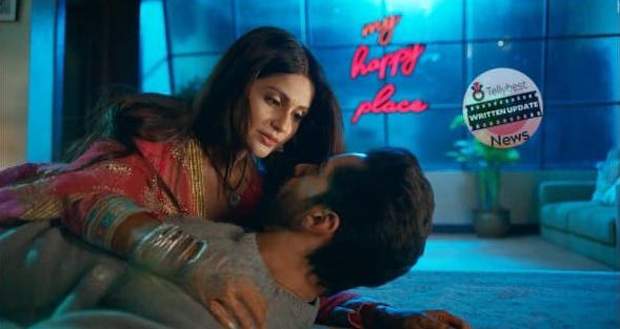 Today's Imlie 22nd October 2022 episode starts with Cheeni telling Rupi that Imlie is not at home while the family members enter and get worried.

However, Sundar is happy as he knows Imlie has gone to Atharva's house but he does not tell anyone.

On the other hand, Imlie is thinking about her love for Atharva while he feels regretful for not telling Imlie the truth.

Suddenly their car stops abruptly and Atharva goes to check the engine.

Narmada accuses Imlie (Imlie’s Daughter) of destroying their reputation and thinks that Rana will break off their marriage.

Cheeni gets an idea from Narmada’s words so she calls Rudra and asks if Imlie is there.

Rudra asks Cheeni what happened and she tells him that Imlie has gone somewhere.

Cheeni cuts the call while Rudra and his family get worried about Imlie's safety.

However, Cheeni turns around and sees Meethi standing and gets scared thinking she has heard her conversation with Rudra.

However, Meethi asks Cheeni who she was talking to and she lies, saying she was trying to find Imlie’s whereabouts.

Meethi gets worried about Imlie’s safety while Cheeni consoles Amma.

On the other hand, Cheeni and Atharva get stuck in the rain and both stand under a shed.

Imlie is smiling as Atharva is holding her hand and goes in the rain.

She flays her arms out but stumbles and falls into Atharva's arms and gets lost in his eyes.

Imlie’s heart beats loudly when Atharva’s locket gets stuck in her dupatta.

Arto releases her from the locket’s hold and Imlie runs out in the rain taking Atharva with him.

In Rathore, Sundar and Cheeni get worried as Imlie was supposed to come home after meeting Atharva.

On the road, Atharva starts to enjoy the bliss of rain with Imlie but she jumps and splashes puddle water on him.

He gets serious and scares Imlie but he jumps in the puddle and splashes her in return.

Just then, Imlie tells Atharva that she enjoys the rain as she treats it like her mother’s blessing.

Atharva tells Imlie that he has never enjoyed rain before like this but Imlie shocks him by saying she loves him.

The rain stops while Imlie opens her arms and confesses her love to Atharva.

© Copyright tellybest.com, 2022, 2023. All Rights Reserved. Unauthorized use and/or duplication of any material from tellybest.com without written permission is strictly prohibited.
Cached Saved on: Monday 21st of November 2022 07:46:14 AMCached Disp on: Thursday 1st of December 2022 12:44:01 PM