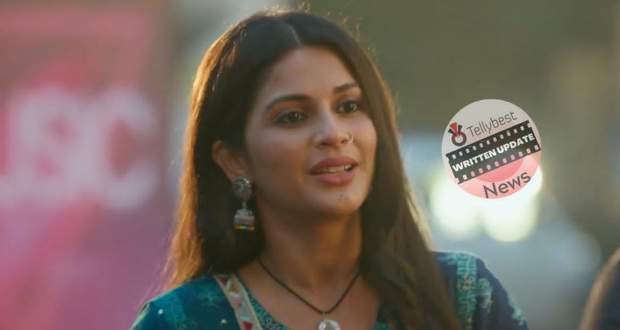 Today's Imlie 22nd September 2022 episode starts with Atharva dropping Cheeni and Imlie at their house and he waits for Cheeni to turn around.

At the same time, Cheeni turns around and gives him a wide smile and Atharva's heart skips a beat.

In the Rathore mansion, Arpita, Sundar and Ruby welcome the girls with a cake on the table but Narmada accuses Imlie of tarnishing Rathore's integrity.

Meanwhile, Imlie lies to everyone about going to the temple and Sundar urges Imlie to cut her birthday cake.

However, Narmada smashes the cake on the floor and calls her a jinx.

Cheeni consoles the crying Imlie and takes a breath of relief as her secret about going to the concert is not out.

On the other hand, Atharva enters his house and gets confronted by his father.

Rudra (Atharva’s Father) insults Atharva for tarnishing Rana’s name and being a criminal and breaks Atharva's heart with his harsh comments.

In Imlie's room, everyone except Narmada surprises Imlie with a surprise birthday party and cheers her up.

Just then, Imlie hugs Cheeni and Ruby teases Imlie about hugging her special person until her next birthday.

At the same time, Atharva finds Imlie's poem in the passenger seat and gets shocked reading the beautiful lines.

The next morning, Rana and his wife are talking about their son's lack of ambition as Akash (Rudra’s Elder Son) is always finding shortcuts to earn money and Atharva is wasting his life on music.

At the same time, Atharva's aunt enters the room and assures Rudra that Atharva will change after he gets married.

In Rathore's mansion, Imlie asks Cheeni about her ideal partner and she declares she wants a wealthy person.

Afterwards, Anu insults Imlie and refuses to give her blessings and when Arpita confronts her, Anu insults them for not transferring Rathore's property to Cheeni legally.

Listening to Anu’s words, Imlie agrees to transfer Rathore's property to Cheeni as she loves her the most.

Cheeni holds Imlie's hand happy with her answer while Ruby comments to Anu that Cheeni does not want Rathore's property.

In Atharva's room, Atharva’s siblings inform him about Rudra finding an ideal girl for him and ask about ideal partner traits and he recalls Cheeni.

At the same time, his mother informs him to attend his father’s friend's marriage and Atharva realises his siblings were playing with him.

Later, Atharva is thinking about Cheeni continuously and he decides to do something about it.

© Copyright tellybest.com, 2020, 2021. All Rights Reserved. Unauthorized use and/or duplication of any material from tellybest.com without written permission is strictly prohibited.
Cached Saved on: Friday 30th of September 2022 07:07:51 PMCached Disp on: Saturday 1st of October 2022 12:16:33 AM