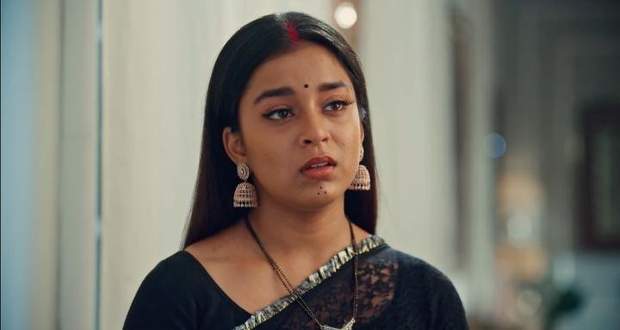 Today's Imlie 23rd April 2022 episode starts with everyone having breakfast when Neela tells Arpita she has something for her.

They all think that it is a food item but Neela brings Haldi and applies it to Arpita saying that she should think about her future.

Neela indirectly insults Arpita saying that she has found a family who is ready to accept a widow as a family.

Arpita leaves the breakfast table and Imlie tries to go after her but Neela stops Imlie midway saying that nothing she'll do will work now.

Later, Imlie tries to tell Aryan that Arpita likes Sundar and that she was talking about them the previous day.

However, Arpita comes there and tells Aryan that Narmada is calling for him.

Aryan leaves as Arpita questions Imlie who reveals that she was going to inform Aryan about Sundar.

Imlie tries to assure Arpita that Sundar loves her when Aryan overhears them and shouts at Imlie.

Aryan barges into the room and scolds Imlie saying that he will never accept Sundar.

Aryan tells Imlie that her talking about love is baseless as both of them don't have value in it in their life.

Later, Imlie is talking to Madhav outside the office when she sees a man insulting an old woman for touching his car and goes over there.

Imlie goes to the man and tells him to apologize to the old lady but he leaves from there in his car.

Imlie reaches home and decides to help Narmada get the preparations ready for the meeting with the grooms.

Meanwhile, Neela and Gudiya change the cutlery into paper plates while sending away all the servants.

However, he sees the paper plates and gets angry at Imlie thinking that she's trying to ruin the meeting while Neela and Gudiya watch from afar.