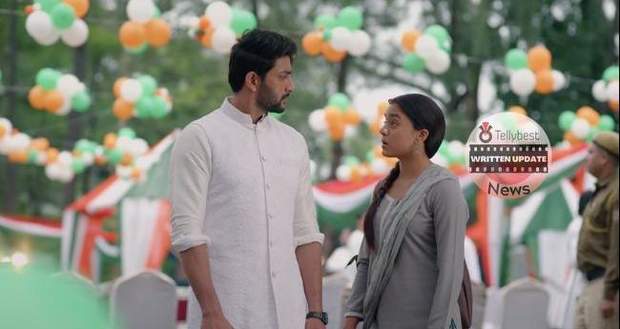 Today's Imlie 23rd August 2022 episode starts with Imlie taking a hold of the earring and thinking that it belongs to the lady who planted the bomb.

Back in the parking lot, Malini is about to throw away the second earring when the Rathore family comes there and starts talking to them.

Malini gets worried as Anu foolishly tells the Rathore family that she called Malini to take her out of the event as soon as she learned about the bombing.

Arpita scolds them for thinking only about themselves and not informing the Rathore family as she angrily asks them if they were the ones who planted the bomb.

In anger, the earring falls from Malini's hand and Cheeni notices it and questions Malini about it.

However, Malini lies that she was going to wear it now.

Just then, a police officer comes there and informs them that Imlie has provided them with some evidence against the culprit and takes Aryan with him.

The Rathore family goes back home while Malini and Anu also hurry out of there scared of getting caught.

On the other hand, Aryan goes to Imlie and is shocked when she tells the police officer praising her about Bhaskar Times being back in the game of news reporting.

Afterward, both Imlie and Aryan talk at the same time and Aryan tells Imlie that her Cheeni is his little miss sugar.

Imlie wonders if he would be the same with her if he learns that Cheeni is none other than their Gudiya.

Imlie tells Aryan to not abandon Bhaskar Times and he tells her that they will leave after getting ready.

Later, Anu dreams of being jailed and wakes up scared while Malini calms her saying that they will get a similar earring made before anyone can connect it to her.

Just then, Aryan calls Malini and informs her to get ready and come to the office as Bhaskar Times as they will have to find the culprit who planned the attack at the Independence day event.

As soon as Malini reaches the office, she starts lecturing the employees and gets stopped by Imlie who tells her that Aryan will be the one speaking since he's the boss.

Aryan introduces himself to everyone as the CEO and the Owner of the Bhaskar Times and tells the employees to find the culprit based on the evidence that Imlie gives to everyone.

An employee praises Imlie for bringing back Aryan to the office while Imlie says that Aryan is back permanently.

Malini worries about her financial frauds being exposed if Aryan returns and her having to go to jail.

Just then, Malini's purse falls and the earring falls out of it which Imlie notices and gets shocked.

Imlie confronts Malini and tells the police that she has found the culprit.