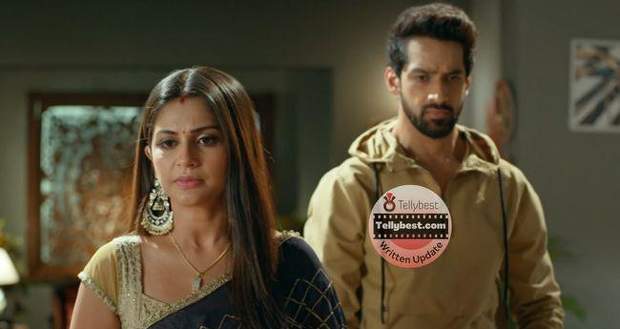 Cheeni manipulates Imlie into thinking that she and Atharva are still in love with each other and tells her that her destiny is going to test her.

Stating that Imlie always supports the truth, Cheeni requests her to help Atharva and her get back together.

Later, both sisters go back downstairs where the whole Rathod and Rana family celebrate the Lohri festival.

Devika tells Imlie that by taking rounds of the Lohri fire, the couples get destined to be together for not only 7 births but 17 births.

The couples start taking rounds together while Rupi and Arpita tell Imlie to pray for herself this time.

Imlie nods and starts taking rounds of the holy fire while her Dupatta gets stuck with Atharva's watch who starts walking after Imlie around the holy fire.

Imlie thinks about helping Atharva reunite with Cheeni while Atharva wonders how to ask Imlie what Cheeni told her about.

The round completes and Devika and Rudra think that even God wants them to be together.

Keya taunts Imlie that true love is permanent while Imlie agrees with her and runs inside the house.

Atharva sees the torn cloth of the Dupatta attached to his watch and goes after Imlie.

Further, Anu praises Cheeni for seeding doubt into Imlie's mind while Cheeni states that Imlie will become the bridge to her and Atharva's reunion.

On the other hand, Atharva tries to explain to Imlie that he tried to tell her about the message and other interactions with Cheeni but she always stopped him.

Imlie realizes that he is stating the truth and tells Atharva that she can't forgive him since he hasn't done anything wrong.

Atharva gets shocked and tells Imlie that he is tired of Cheeni's drama.

However, Imlie tells him to look her in the eyes and tell her if he wants to meet Cheeni or not.

Atharva states that he can't lie to those eyes and tells Imlie that he doesn't know what he wants.

Imlie feels her hope shattering as she tells Atharva that she wants him to talk to Cheeni.

Atharva also shocks Imlie by telling her that he will meet Cheeni only if she comes with him.

However, Imlie again convinces him to go and meet Cheeni alone for the sake of their friendship while telling him that she will be the happiest if he and Cheeni's true love reunites.

Imlie further wipes her tears away when Atharva isn't looking and pulls out two fingers while telling him to choose.

He asks her if she's serious while Imlie tells him that they should leave the decision to destiny and tells him to choose.

Atharva chooses the index finger while Imlie feels guilty for lying but convinces herself that at least someone should get their love in this house.

She tells Atharva that he should meet with Cheeni and clear everything between them while Atharva's face falls.

He starts leaving with a down face while Imlie asks him why he is upset.

Atharva looks at her with bloodshot eyes and unshed tears as he asks her as if she doesn't know.

© Copyright tellybest.com, 2022, 2023. All Rights Reserved. Unauthorized use and/or duplication of any material from tellybest.com without written permission is strictly prohibited.
Cached Saved on: Wednesday 25th of January 2023 09:04:49 AMCached Disp on: Sunday 5th of February 2023 03:34:09 AM