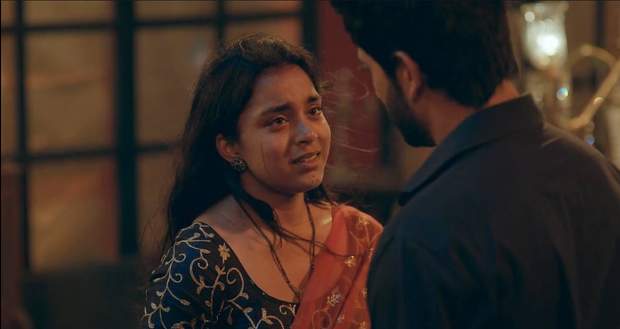 Today's Imlie 23rd May 2022 episode starts with Jyoti asking Aryan if everything is alright and questioning him about Imlie's health.

However, Aryan doesn't say anything and tells her that Imlie just got wet in the rain and got sick.

Jyoti offers Aryan juice for Imlie while he notices an injury on her hand and questions her.

However, Jyoti waves it off and says that she didn't notice as she was worried for him and Imlie.

Further, Aryan goes to Imlie's room while he notices her admiring the stars by sitting on the swing on the balcony.

Aryan sits with her and puts his hands on her shoulders while she makes him point towards the Northstar.

He gets confused while she tells him that he is her Northstar and that she will always follow him no matter what.

Aryan feels ecstatic and hugs her while telling her that he will always love her.

The next morning, Imlie is making a huge breakfast for Aryan while the servants stop him from entering the kitchen.

Aryan admires her while Imlie asks the servants to suggest her something for dessert.

Aryan sends away all of the servants and further tries to get close to Imlie but she doesn't notice him and orders him around.

After some time, Aryan encloses Imlie between his hands and makes his presence known.

Aryan tries to kiss Imlie but she gets shy and ducks him while making fun of him.

She calls him a child and accidentally talks about their future children which makes both of them flustered.

Later, Jyoti goes to the kitchen and distracts Imlie while adding something to the food made by her to make Narmada sick and put the blame on Imlie.

Elsewhere, Gudiya brings food for Narmada to get in good books and says that she knew it was time for her to take medicines.

Just as Narmada starts eating, Imlie comes there with all the food prepared.

Aryan and Arpita berate Narmada for eating without them while Imlie says that it's okay and gives her the medicines.

Just then, Imlie takes a bite but immediately spits it out while everyone looks on.

To download Imli all episodes or watch Imlie today's (23 May 2022) latest full episode, go to hotstar.com