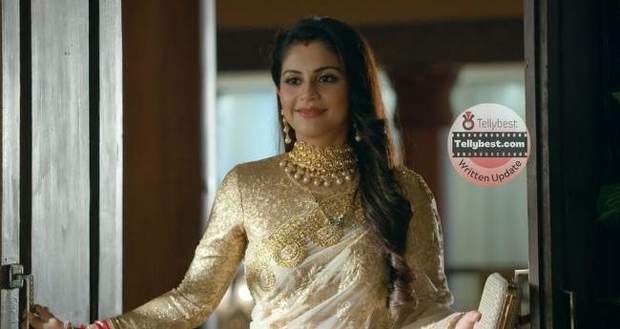 Today's Imlie 23rd November 2022 episode starts with Rudra encouraging Imlie to talk to Atharva and sort out their problem.

Imlie gets encouraged and leaves followed by Rudra while Cheeni fumes in anger.

On the other hand, Devika sits with Atharva and tells him that he should apologize to Imlie knowing that she is getting taunts from the family members which she does not deserve.

Later, Imlie enters the room and gets surprised to see Atharva decorating the room.

Atharva walks up to her and apologizes to her for insulting her about her outfit and other things at the dinner.

Imlie tells Atharva that she has already forgiven him.

She also apologizes to Atharva and tells him that she was not planning to decorate the hotel but Cheeni had advised her to do so.

Atharva gets angry wondering why Cheeni did this when she knows it was not a date.

Atharva confronts Cheeni afterward while she again weaves up a story of doing the decorations for him and him giving Imlie the credit.

Atharva feels guilty and hugs Cheeni while apologizing to her.

Later, Rudra and the family are seated at the dining table when Rudra informs them that a few international investors are coming to the house and he wants all the family members to be present.

Imlie happily tells that she will help Devika prepare for it while Keya argues that she also wants to help.

However, once she sees the list of the work, she takes back her words and tells Imlie to do the work.

Meanwhile, Atharva tells Rudra that he won't be a part of this and leaves after arguing with him.

Imlie thinks that she has to do something and goes to their room where Atharva sits while making an angry face thinking about the event downstairs.

Imlie comes to him and manages to explain beautifully to him why the elders know more than them and why they should follow their advice.

Later, Imlie is busy making food while the guests arrive and get greeted by the family.

The foreign couple gets surprised by the family's hospitality.

However, when Imlie comes there with the snacks, the guests mistake her for the maid.

Keys introduces Cheeni and the guests once again make a mistake and call her Atharva's bride, that is the daughter-in-law (Bahu) of the house.

© Copyright tellybest.com, 2022, 2023. All Rights Reserved. Unauthorized use and/or duplication of any material from tellybest.com without written permission is strictly prohibited.
Cached Saved on: Wednesday 23rd of November 2022 11:18:33 PMCached Disp on: Thursday 1st of December 2022 01:15:16 AM