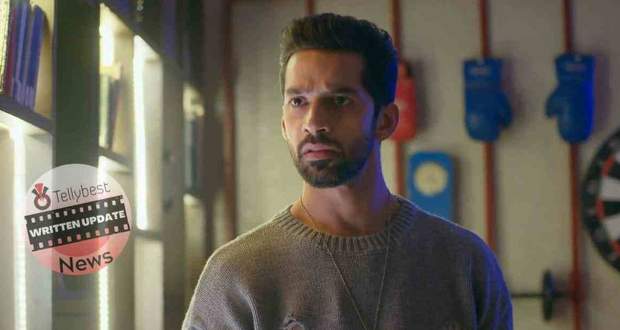 At the same time, two cars arrive with the Rana family in one and the Rathore family in another to take back Imlie.

Later, in Rathore's house, Imlie and Atharva stand embarrassed while everyone glares at them.

Rudra walks towards them and scolds Imlie for being careless but Atharva tells Rudra to scold him not her.

However, Rudra laughs and says he’s joking and everyone laughs.

Arpita expresses her gratitude to Atharva for bringing some adventure into Imlie's life.

Seeing everyone praising Imlie for doing wrong, Cheeni gets angry and thinks that now she will not hold back.

Cheeni agrees to use Anu’s plan of exchanging brides.

Outside the Rathore mansion, Cheeni tells Atharva about her plan but Atharva refuses to marry anyone.

He tells her he will never betray his true love and marry after cheating on someone.

Cheeni gets scared of losing all of Rana’s wealth and tries to act like a victim.

However, Atharva does not listen and goes to tell Imlie the truth after assuring Cheeni that he will not take her name in front of her family.

In Rathore's mansion, Arpita is admiring Imlie who is wearing her red marriage dupatta to take to feel like a bride.

Imlie tells her she loves Atharva and she has found someone to spend her life with.

At the same time, Imlie sees Atharva but he runs away to stop Cheeni from suicide.

Cheeni is standing on the rooftop and says can die for his love and save him from the hassle of telling the truth to anyone.

Atharva holds Cheeni’s hand and pulls her in his arms and hugs her tightly.

She orders him to leave her but he says never and both confess their love to each other.

Later, Atharva agrees to do whatever Cheeni says and she blackmails him with the idea of suicide.

Seeing Atharva in dilemma, Cheeni hugs him from behind tightly.

The next morning, Atharva brings Haldi for Imlie in her Haldi ceremony and she blushes seeing him.

Meanwhile, Cheeni tells Anu that the plan is set and Anu advises her to put haldi on Arto first.

Cheeni and Arto walk towards each other and she dips her finger in the paste and moves her hand towards his cheek.

However, Imlie holds her hands but Cheeni reasons that her possessions are also her’s.

Imlie contradicts Cheeni saying Atharva is not a possession but her life partner.

© Copyright tellybest.com, 2022, 2023. All Rights Reserved. Unauthorized use and/or duplication of any material from tellybest.com without written permission is strictly prohibited.
Cached Saved on: Monday 21st of November 2022 08:37:05 AMCached Disp on: Wednesday 7th of December 2022 03:32:52 PM