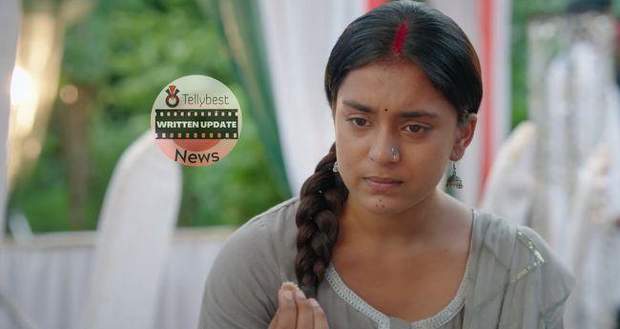 Today's Imlie 24th August 2022 episode starts with Malini standing worriedly as Imlie tells the police officer about finding the same earring as the one found at the event.

The police question Malini and before she can say anything, Anu comes there with the same pairing of the earring and lies that Malini forgot it in the car.

Flashback shows Anu getting the earring made from the jewelry shop and getting the CCTV footage erased.

Back in the present, Malini acts angry with Imlie and scolds her for falsely blaming her.

However, Aryan steps in and tells Malini that Imlie has always proven the accusations that she has made.

Later, Malini demands Imlie to apologize when Imlie in her Pagdandiya way apologizes to Malini but says that she will get her red-handed the next time.

Malini claps for Imlie mockingly and tells her that they will go back to their normal lives once she leaves their lives as she's not that important to anyone.

Walking out of there, Malini feels proud of herself as she sees the employees coming toward her.

However, in reality, the crowd of employees go to Imlie and praise her as Aryan also looks at everything from his office.

Malini reaches her home in anger and starts destroying the room as Anu comes there and calms her.

On the other hand, the Rathore family talks about celebrating Janmashtami grandly while Aryan gets emotional recalling his arguments with Imlie and leaves from there.

However, Arpita notices him trying to hide his tears and goes after him telling him to take part in the celebration with the family.

Aryan states that he lost his child because of Imlie while Arpita argues that even though Imlie is suffering from the same pain but she has learned to smile for others.

Later, Cheeni talks to Meethi on call and tells her that she will bring Aryan and Imlie together soon while Neela overhears her.

Neela sends Preeta to Malini's house to give her the information and Malini feels agitated and angry to hear the news.

On the other hand, at the Rathore mansion, Imlie does the decorations while Aryan is coming downstairs from his room.

Cheeni formulates a plan and using her slingshot toy, throws a marble on Aryan making him hit the stool that Imlie was standing on and both of them falls to the ground together.