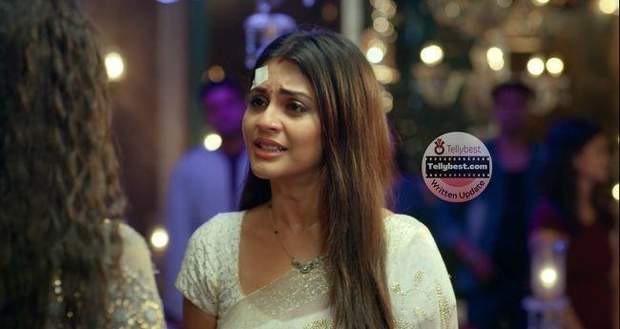 Today's Imlie 24th December 2022 episode starts with Cheeni going in her car while Anu stops her.

Anu tells her that she has a surprise for her and shows her a wedding card sample.

Cheeni gets excited thinking that it is for her and Abhishek but her smile turns into a scowl as she sees Atharva's name.

On the other hand, Imlie is leaving when she hears Shivani telling Devika that they should get Atharva married to Cheeni as he loves her.

Imlie thanks God as she says that she won't be there to witness it and bids goodbye to the family member where everyone except Rudra and Devika moves away from her.

At the same time, Cheeni tells everything to Abhishek while telling him that she didn't want to hide anything from him.

Abhishek looks into her eyes as he says that everyone has a past and asks Cheeni if she can see her future with him.

Cheeni immediately agrees and tells him that she has even started falling in love with him.

Back at the Rana house, Imlie looks at Atharva and turns to leave while her pallu of the saree gets stuck in the bush.

Imlie thinks that it is Atharva as she turns to him hopefully.

However, her heart shatters once again as she realizes that her saree is stuck and removes it as she goes towards her car.

Just then, Cheeni and Abhishek come there in a car and come out holding each other's hands.

Abhishek and Imlie get surprised to see each other while Imlie tries to joke that every time they meet she is drowning in tears.

Further, Abhishek tells Imlie that he has seen her struggling to fight her tears and tells her that she is very strong.

Cheeni asks them how they know each other while Imlie tells her that he was a stranger who supported her when she was going through Atharva's betrayal.

Cheeni reveals that she and Abhishek have exchanged rings and want to get married.

Rudra goes to Imlie and tells her that she can mend her relationship with Atharva now that Cheeni is out of the picture.

However, Imlie tells him that she can not as in their relationship, it is only her who is in love.

Rudra encourages her and she leaves while Atharva takes Cheeni aside and tells her that he knows what she is doing now.

He tells her that she did everyone to keep their family happy while Cheeni manipulates him into agreeing to her marriage with Abhishek and makes him promise to attend all her functions.

Cheeni and Abhishek leave while Atharva looks at her heartbroken.

© Copyright tellybest.com, 2022, 2023. All Rights Reserved. Unauthorized use and/or duplication of any material from tellybest.com without written permission is strictly prohibited.
Cached Saved on: Wednesday 25th of January 2023 09:58:07 AMCached Disp on: Thursday 9th of February 2023 04:49:02 AM