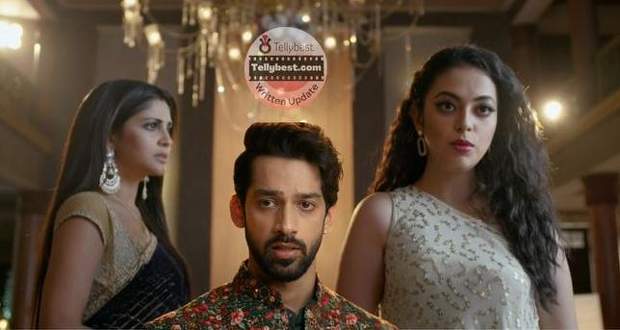 She looks at him with unshed tears as she states that they should get used to staying away from each other.

Atharva leaves the room and looks back at the door as he sees Imlie closing the door in his face.

Atharva wonders why he isn't happy while Imlie leans on the door and convinces herself stating that she should not feel so hurt when she knew their relationship was not meant to stay.

On the other hand, Anu excitedly hugs Cheeni and tells her that Atharva will be hers soon.

The next morning, Imlie is praying to Sita Maiyaa and talking about Cheeni while Cheeni comes there and tells God that she truly loves Atharva and wishes for an epic love story like theirs.

Further, Cheeni turns to Imlie and requests her to lend her help in reuniting with Atharva.

Imlie tells her how she can help her get her love when she couldn't get the love that she wanted.

Imlie puts on a strong face and tells Cheeni that she has managed to get one chance to talk with Atharva that she asked for and tells Cheeni to prepare herself since Atharva become used to hearing the truth after staying with her.

Cheeni gets jealous and tells Imlie to lose the habit of Atharva since he's going to her hers from now on.

Imlie tells Cheeni that she can detach herself from Atharva but only if someone likes him truly.

Just then, Cheeni gets a call from Abhishek and she irritatingly disconnects it while stating that she doesn't have time for him.

Imlie tells Cheeni that she should tell the truth to Abhishek too while Cheeni manipulates Imlie to go in her place stating that she should repay Abhishek for all the times he has helped her in the past.

Imlie feels bad that Abhishek has to live with the lie and calls him to meet up to tell him the truth.

On the other hand, Anu tries to warn Cheeni saying that Imlie is still stubborn and can be a thorn in her path.

However, Cheeni smirks as she sips on her drink and says that Imlie will be the door to her union with Atharva.

Later, Imlie sits with Abhishek and apologizes to him for interfering in their personal matter.

However, Abhishek tells her to not be sorry since he asked her for advice when he and Cheeni got into an argument.

Imlie gets emotional and tells Abhishek to remember that a third person is never welcome in two people's love story, whether it be her or him, and leaves.

Meanwhile, at the hotel, Cheeni sits beside Atharva and asks him if he got excited and happy at the thought of meeting her.

However, Atharva tells her that he frankly had questions about why she wants to talk to him now.

Cheeni tries to talk about how she thought about only him when she was extremely happy or sad while Atharva thinks of Imlie and says that he felt the same.

Cheeni gets annoyed that Atharva is stuck on Imlie and leaves for a break.

Back at home, Imlie tries to distract herself with work and calls her sir who agrees to let her go in place of Gaurav to investigate the fake-note printing scandal.

Back at the hotel, Cheeni returns as Atharva hears a kid reciting Imlie's poem.

He turns to Cheeni and confronts Cheeni about taking credit for the poems that Imlie writes as Ms. Shaira.

© Copyright tellybest.com, 2022, 2023. All Rights Reserved. Unauthorized use and/or duplication of any material from tellybest.com without written permission is strictly prohibited.
Cached Saved on: Wednesday 25th of January 2023 08:48:40 AMCached Disp on: Sunday 5th of February 2023 03:29:02 AM