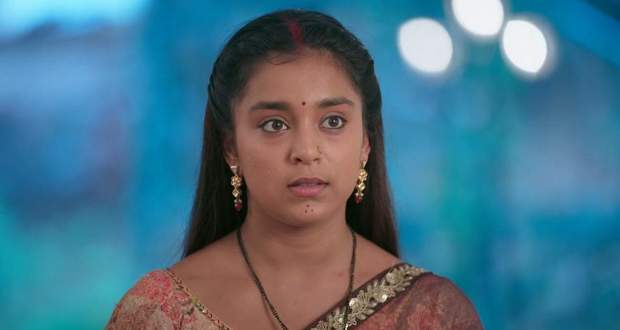 Today's Imlie 24th June 2022 episode starts with Aryan telling Jyoti that anyone who did wrong will get punished.

Jyoti leaves from there in anger while Keri (lmlie) is seen eavesdropping while acting to clean the vase.

Gudiya notices Keri and tells her to bring coconut water for her.

Imlie gets an idea and goes to Jyoti with coconut water.

Further, Keri (Imlie) acts in front of Jyoti and gains her trust by talking ill about Imlie.

Meanwhile, Aryan reaches Madhav's house and gets shocked to see that Madhav's apartment is on fire.

He remembers that Madhav's mother is also there and rushes to save them while Harry sees him.

Flashback shows, Jyoti giving the matchstick box to Harry and telling him to finish Madhav.

Back at the Rathore house, Keri (Imlie) brings coconut water for Jyoti and further makes friends with her while Keri (Imlie) discreetly puts the recording device to record their conversation.

Meanwhile, the police come to Madhav's apartment and arrest Aryan for the attempted murder of Madhav and his mother.

Back at the Rathore house, Jyoti makes drinks for both herself and Keri (Imlie) planning to see if Keri (Imlie) is loyal to her or not.

However, Keri (Imlie) acts as drinking while she throws away the drinks and makes Jyoti drunk.

Jyoti tells Keri (Imlie) that she's happy as Madhav's house is on fire.

Just before Jyoti can expose herself, Harry comes there and tells Keri to leave from there.

Imlie takes the recording device and leaves from there when she gets a call and learns that Aryan is in jail.

Later, Keri (Imlie) goes to the police station lying that she's the new cleaner, and meets Aryan while asking him why he's there.

Aryan tells her to not inform Imlie about him being and jail and reveals that he went to Madhav's house to clear some misunderstandings.

Imlie feels grateful to hear that Aryan listens to her even when they are arguing with each other.