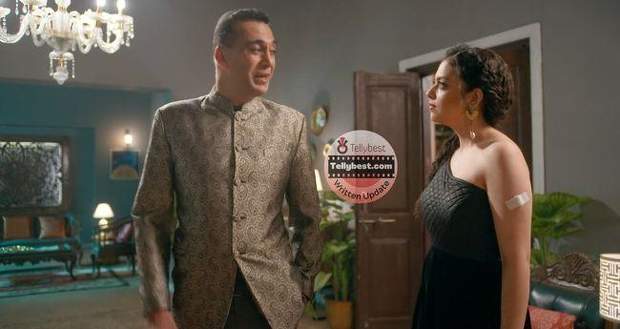 Imlie feels bad so she takes Cheeni aside and asks her why she didn’t correct Mr Peter when they mistook her as Atharva’s wife.

At the same time, Atharva also enters and makes efforts to talk to Mr Peter which makes Akash insecure.

Imlie decides to not say anything as Atharva finally takes part in Rana's business affairs.

Later, Cheeni sits closely with Atharva while Mr Peter compliments them for being a good couple.

Atharva asks Cheeni to maintain some space between them but Cheeni does not buzz.

In the kitchen, Divya and Shivani say that everything is going well because Imlie’s black eye is not on them.

At the same time, Imlie wraps a cloth around her eyes while Divya touches a hot pan accidentally and burns her hand.

Imlie sarcastically tells Divya that she didn’t put her evil eye in her so how did her hand burn.

Later, Rudra enters and asks for Imlie and gets shocked to find that Imlie is working in the kitchen.

Rudra gets angry as alcohol has never entered the Rana house before.

Meanwhile, Cheeni orders Imlie to pour the wine into glasses and Atharva stops her but Imlie pours it anyway.

She walks towards the clients while Cheeni stuck the carpet in between Imli’s legs.

Imlie falls and slashes the wine on Mr Peter's wife.

Mr Peter bashes Imli with insults and calls her servant while Atharva looks at him infuriated.

Both Rudra and Atharva try to butt in while Imlie takes Mr Peter’s wife inside the bathroom.

However, Akash takes Rudra and Atharva to a corner and persuades them to not say anything as they will lose the deal.

Atharva walks away angrily and Cheeni pulls him aside in a corner.

Cheeni and Atharva argue for caring for Imlie’s respect and Atharva exclaims he will not let someone insult Imlie.

He says he cannot love Imlie so he will care for her and walks away.

Cheeni slams her hand on the wall angrily and thinks Atharva is caring too much for Imlie.

Rupi states that she will not let Cheeni interrupt Atharva and Imlie’s relationship.

In Atharva’s room, Atharva holds Imlie’s hand and pulls her close asking if she is feeling anything.

Imlie’s breath hitches due to closeness but Atharva leaves her hand and scolds her for not taking a stand in front of Mr Peter.

She pinches the air and tells Atharva she does not feel anything as she walks with a shield of his protectiveness.

He exclaims that he will not let anyone taunt his wife in his house and Imlie blushes to listen to Atharva’s words.