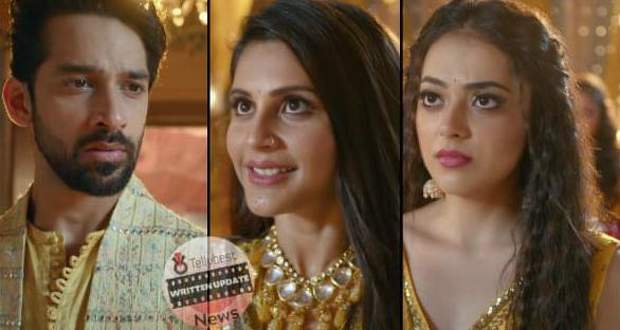 Today's Imlie 24th October 2022 episode starts with Imlie telling Cheeni to let her put haldi on Atharva first as he is her life partner.

Cheeni takes a step back while Atharva looks at her with longing eyes.

Imlie dips her hand in haldi and slides her hand on Atharva’s cheek gently and he also puts some haldi on her reluctantly.

Seeing them together, jealous Cheeni goes away and Atharva follows her after making an excuse.

He is afraid that Cheeni might do something to herself so he apologizes to her.

However, Cheeni reassures Atharva that they will get married today and walks away happily.

Meanwhile, Atharva is sad because his actions will break Imlie, her family and Rana families hearts.

At the same time, Imlie offers a towel to Atharva and gives him instructions to remove the haldi stain.

However, he is not able to remove it so Imlie holds the towel and helps him remove the haldi.

Imlie requests him to tell her if he feels burdened and she asks him to speak about his problems as she wants to share his burden.

Hearing Imlie’s reassuring words, Atharva is about to tell her the truth but his mother called her.

In Rana’s mansion, Kia and Akash decide to do anything to get Imlie and Atharva married as they can become the owner of Rana’s property only then.

In Imlie’s room, Imlie has written a poem and tells the newspaper editor that the draft is ready.

Meanwhile, Sundar enters and teases her about doing work on her wedding day while the Rathore ladies enter.

Everyone is emotional as Imlie will leave them today and Narmada shocks everyone by complementing Imlie.

Meethi says she is confident that a girl who has a connection with soil and rain can connect with anyone.

On the other hand, Atharva recalls all the events happening between him, Cheeni and Imlie while Rudra enters.

Rudra assures Atharva that he will not regret marrying Imlie and he will realise it after some years.

Meanwhile, Atharva thinks he has no way to stop Cheeni’s plan as she will hurt herself.

In Rathore's house, Cheeni enters the room and teases Imlie with her sarcastic comments.

Innocent Imlie does not mind Cheeni’s words and Cheeni asks her to get her makeup retouched.

Cheeni slides the brush on the powder containing anaesthesia that will make Imlie sleep for some time.

She happily slides the powder on Imlie’s cheek and thinks her plan will succeed after Imlie gets unconscious.