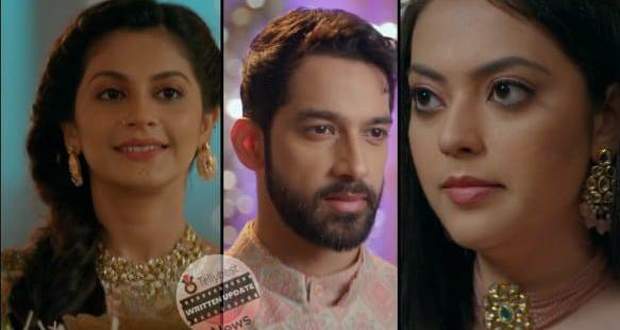 Furious Cheeni goes away and DJ Arto introduces himself to Imlie while she picks up glass shards.

Atharva sees Cheeni worried and offers to help and asks for her name in return.

The next morning, the Rana family gets impressed with Imlie’s thoughts on the pure relationship between a mother and a daughter.

Meanwhile, Devika asks Imlie for her mother but she informs her that her Sun (Imlie’s Mother) resides in the sky and Devika pity her.

Later, Imlie goes to bring Parul from her room while Atharva refuses to help Cheeni to make Parul run away.

However, Cheeni lies about Parul's parents torturing her and letting her marry the person she loves.

Listening to Cheeni’s words, Atharva gets ready to help Cheeni as love can never be wrong.

On the other hand, Arpita and Ruby get emotional thinking about Imlie’s Vidaai but Narmada declares she will distribute sweets and cry about the fate of her in-laws.

At the same time, Imlie finds the room empty and goes out to find Parul but Narmada stops her suspiciously and enters the room.

Everyone gets shocked seeing the room empty while Arpita asks Imlie to think where could Parul have gone.

Outside the venue, Cheeni sends Parul in a car and smirks at Imlie's defeat as she successfully made the bride run away.

Later, Narmada asks Imlie about Parul and Imlie recalls the conversation of running away between Parul and Cheeni.

However, when she is about to tell Narmada about Cheeni’s plan, Cheeni interrupts them by declaring that Parul has run away.

Hearing Cheeni’s declaration, everyone gets shocked and Imlie assures everyone that she will find Parul and goes out of the room.

Cheeni follows Imlie and challenges her to find Parul and calls out her old-school thinking.

Later, Imlie lies to Atharva to help him buy some things for the bride while he helps her, baffled as he knows the bride has run away.

In the car, Imlie asks someone to track Parul’s phone and instructs Atharva in the accurate direction.

Meanwhile, Imlie narrates a poem and Atharva gets shocked recognising the voice.