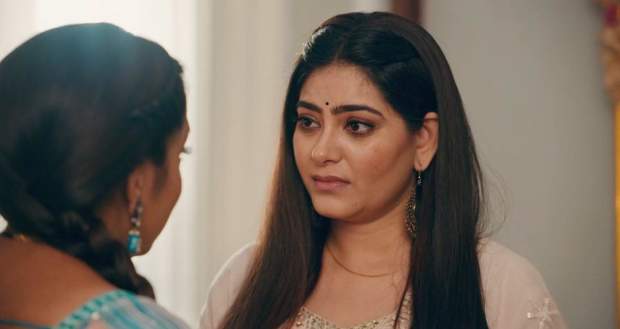 Today's Imlie 25th April 2022 episode starts with Imlie seeing Arpita distracted and touching her on the shoulder to get her attention.

Arpita hesitantly asks Imlie about Sundar's well-being while Imlie tells her to call Sundar herself.

Imlie starts talking harshly about Sundar when Arpita stops Imlie and says that Sundar is more than just a friend to her.

Imlie gets happy finally hearing Arpita's confession when Arpita tells Imlie that her happiness doesn't matter as a society will rebuke her family for it.

Arpita leaves from there while Imlie says out loud that she can't let Arpita's marriage happen.

However, Aryan overhears Imlie and misunderstands her intentions after which he locks up Imlie.

Aryan coldly tells Imlie that he won't release her until the guests leave while Uday rings the bell.

Narmada welcomes him but Uday directly goes inside without saying anything and prays in the temple.

Uday apologizes to Narmada and says that he has a habit of praying to the lord first before greeting anyone else.

Uday acts nice in front of the Rathore family while Imlie falls from the table as she fails to open the windows and get out of the room.

Neela suggests Arpita and Uday go to the garden and talk while Imlie manages to get to the balcony.

In the garden, Arpita is lost thinking about her moments with Sundar while Uday tells her that he likes her and will take care of her whole life.

Imlie sees them and tries to overhear their conversation but fails after which she jumps from there with the hope that she'll be okay.

Aryan catches Imlie while she thinks that she has reached heaven.

However, Imlie opens her eyes and gets shocked seeing Aryan while he drops her and scolds her for jumping from the balcony.

Both Aryan and Imlie argue and go inside while Neela is trying to convince Arpita to agree to the marriage with Uday.

Imlie stops Neela and asks Arpita if she liked Uday and if Uday asked her about her plans and further things.

Aryan speaks up and agrees that Arpita should also interview Uday to check if they are compatible or not.