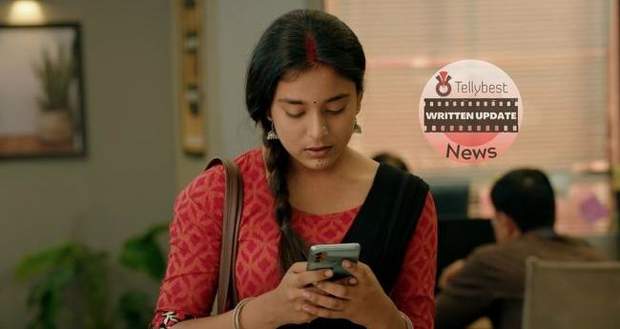 Today's Imlie 25th August 2022 episode starts with Cheeni aiming a marble at Aryan while Imlie is putting flowers on the pillar.

Aryan stumbles on the marble and crashes into Imlie’s stool taking her down with him while the pink roses showers on them.

Imlie falls on Aryan’s chest and he gets lost in her sparkly eyes.

Meanwhile, Imlie stands up and accuses Aryan of having buttons instead eyes.

Aryan accuses Imlie of falling on him and Imlie asks him why did he cushion her fall.

Unintentionally, Aryan blurts out that he cannot let her fall.

Hearing Aryan’s answer Imlie holds Aryan’s collar and confronts him for saving her from every problem in Pagdandiya and the city.

Meanwhile, furious Aryan orders Imlie to stop interfering in his life and his family celebrations.

The next morning, Imlie decorates the swing while Cheeni and Jaggu come to see the swing.

After bantering with Cheeni for her rude language, Jaggu asks Cheeni where her parents are while holding Arpita and Sundar’s hands.

Cheeni sees Aryan coming and holds his and Imlie’s hand while calling Aryan and Imlie as “Nand Baba” and “Yashoda Maa''.

Cheeni requests Aryan to be with her at night but Imlie scolds Cheeni for not letting Aryan do his work.

Seeing Cheeni cry, Arpita and Narmada scold Imlie and Aryan while Aryan agrees to stay for his Sugar.

At the same time, Malini enters the Rathore house crying with ladoo Gopal.

Malini plays the victim card of not having her gudiya by her side and celebrating the Janmashtami alone.

Narmada invites Malini to celebrate Janmashtami with them while Cheeni takes the ladoo Gopal from Malini and puts it in the swing.

Malini gets happy and praises Cheeni in mind while Imlie recalls Malini leaving her baby in the crib.

Later on, Cheeni calls Krishan Ji her brother while Jaggu and Cheeni start to fight to dress up as Kanhiya.

Imlie stops the fight and tells both of them can dress up as Kanhiya.

However, Imlie compares Neela to Rakshash and stops Neela from slapping her.

Imlie insults Neela for her bias towards children and calls her a termite in Rathore’s house.

Neela apologizes to Cheeni and leaves the room embarrassed.

Meanwhile, Anu brags about Malini bringing the idol of 22-carat gold while Narmada refers to Imlie as the real gold.