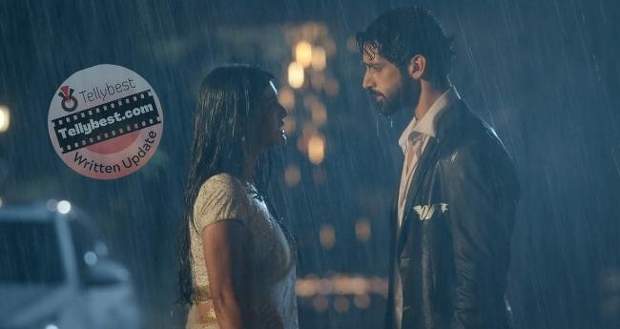 Today's Imlie 25th December 2022 episode starts with Atharva reading one of the poems from Shayra and feeling heartbroken.

Atharva says that he loved Cheeni truly and still loves her when Rudra comes there.

Rudra comes to Atharva and questions him when he will realize that he was just a rich toy for Cheeni.

However, Atharva starts talking back to his father Rudra and tells him that if he had not gotten him married to Imlie, then nothing would have happened.

Atharva tells him that he is the villain in their lives as he is the one who ruined his, Imlie, and Cheeni's life.

Meanwhile, at the Rathod house, Imlie is unpacking her bags while Cheeni rushes there with her outfit and jewelry for her engagement.

Rupy scolds Cheeni while Cheeni angrily reveals to Imlie that Rupy knew about her feelings for Atharva and had still gotten Imlie married to Atharva.

Rupy cries as she tries to justify herself while Imlie shouts that she is the one who has become lonely in all this.

Cheeni asks her how she will be lonely when she will be attending her marriage functions.

Imlie asks her why she should come and taunts Cheeni.

Afterward, Imlie says that she will come to every function so that Cheeni knows what a sister is like.

Later, Anu pesters Cheeni while Cheeni shows an upset Imlie to Anu and calms her for now.

At the same time, Imlie is worried about Rudra not taking his medicines and is about to call him when Rupy stops her.

Rupy tells her that she should give the Rana family some time to get used to not her being there.

On the other hand, Rudra gets a heart attack as he blames himself for ruining Atharva, Cheeni and, Imlie's lives.

Ginny accepts Imlie's call and informs her about Rudra getting a heart attack.

Imlie rushes to the Rana house and Shivani tries to stop her by closing the door on her.

However, Atharva stops the door from closing just in time and lets Imlie inside while he tells Shivani that she should not make hard times even more difficult.

Imlie rushes to Rudra's room where a doctor is checking him while Devika sobs into Imlie's arms.

Imlie leaves the room to cry while Atharva goes after her with a glass of water.

She asks him what had happened and Atharva tells her about the argument between him and Rudra.

Further, Atharva asks her if she's angry at him for fighting with Rudra.

However, Imlie says that she is there for Rudra only and that there is no point in getting angry at a stranger.

© Copyright tellybest.com, 2022, 2023. All Rights Reserved. Unauthorized use and/or duplication of any material from tellybest.com without written permission is strictly prohibited.
Cached Saved on: Wednesday 25th of January 2023 09:05:47 AMCached Disp on: Wednesday 1st of February 2023 05:56:50 PM