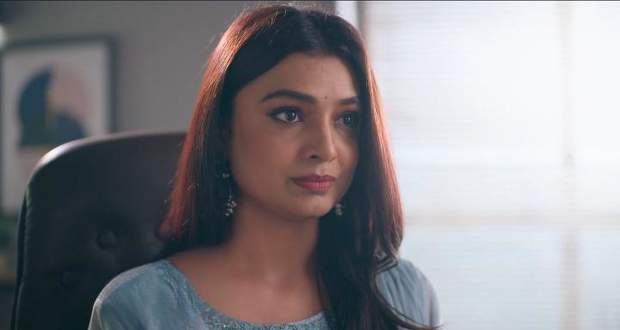 Today's Imlie 25th July 2022 episode starts with Imlie talking to Binni and interviewing her which is broadcasted live on the news.

Binni reveals the truth to everyone and the public starts protesting against the Bhaskar Times media house for spreading false news.

Malini gets angry at the protests and orders Aryan to come to the office immediately.

Aryan reaches the office and gets shocked seeing all the people protesting.

He enters the office and demands to know the whole incident while Malini that the villagers are using emotions.

Aryan sees Binni's interview live and just when Imlie stands up, Malini distracts Aryan to prevent him from seeing her.

Being influenced by Malini, Aryan calls Pagdandiya's editor, Kamal, and threatens him to take down the video.

Imlie notices the distressed expression on Kamal's face and offers to talk to the person on the other end of the phone not knowing that it's Aryan.

However, before lmlie can speak another word, Cheeni takes the phone and starts talking to him which Aryan considers rude.

Cheeni tells Aryan to come to Pagdandiya if he wants to argue with her and disconnects the call.

Afterward, Aryan demands proof from Swapnil while Malini says that Swapnil's report is correct and gives him a promotion to keep his mouth shut.

Back in Pagdandiya, Imlie learns that the media house they are competing against is Bhaskar Times and states that it can't happen.

At the same time, Aryan is in a meeting with his investors and returns their money to them to stop them from questioning him.

Meanwhile, Malini gets to know where Girish is jailed and bails him out.

Later, Imlie learns that Girish is out of jail and worries for Binni while Girish actually kidnaps Cheeni from the school and takes her to a basement.

Further, he calls Malini and thanks her but she tells him that it's not needed as she bailed him out for her own benefit.

Girish informs her that he has kidnapped the reporter's daughter while Malini gets flashbacks of her daughter.