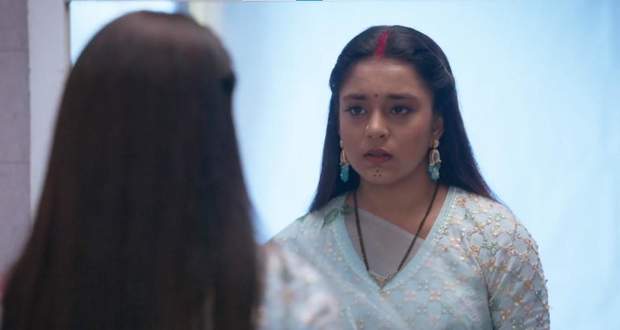 Today's Imlie 25th May 2022 episode starts with Jyoti eagerly waiting for Imlie to open the door handle and get electrocuted.

However, Aryan stops Imlie and asks her to let him open the door being a gentleman.

In the end, Jyoti goes to Imlie and Aryan and tells them that it is unlucky for him to touch metal today.

Aryan agrees and picks up Imlie's bridal style after which he kicks the door open and goes inside the room leaving Jyoti jealous.

The next day, Arpita and Narmada decorate the swing for Imlie while Sundar tries to flirt with Arpita.

Neela and Gudiya look on and feel angry at being excluded from all the activities.

Narmada sends Imlie to get ready while Neela and Gudiya go to Narmada and try to instigate her.

However, Jyoti comes there and stops them saying that it is no use to speak of the past.

Meanwhile, in Pagdandiya, Mithi is delighted to learn that Imlie is pregnant and spreads the whole news around the village.

The people question if Imlie's baby will get the name of the father and Mithi gives all of them a speech on how a mother should come first before the father.

Back at the Rathore house, someone knocks on the main door confusing everyone as a girl walks in.

A girl comes inside and starts talking about her tiffin service while Imlie reveals that she invited the girl.

The girl introduces herself as Banni Chow and starts a friendship with Imlie by offering her food.

Neela insults Banni and Imlie is about to argue but Banni stops her.

Further, Banni feeds the sweets to Imlie and the rest of the family except for Gudiya and Neela who praise her cooking.

Later, Imlie sits at the swing and everyone starts giving her gifts as per the ritual.

Neela tries to degrade her by giving her money but Imlie says that only her blessings are enough and touches Neela's feet.

After the pooja, Imlie sits at the swing and falls from there while Jyoti looks on with a conniving smile.

To download Imli all episodes or watch Imlie today's (25 May 2022) latest full episode, go to hotstar.com