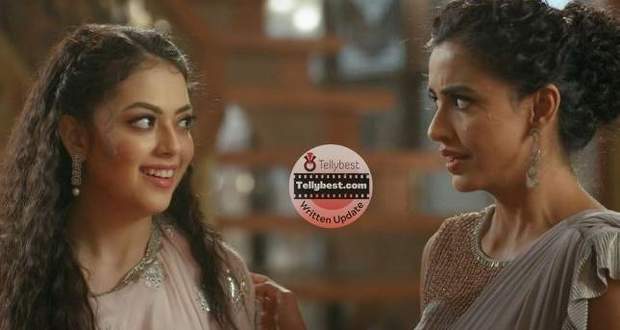 Today's Imlie 25th November 2022 episode starts with Imlie giving Atharva her swear to not say anything to Mr Peter.

Later, Mr Peter insults his wife in front of the whole family saying that his wife embarrasses him everywhere they go.

At the same time, Imlie's voice booms in the hall and she shows Mr Peter’s wife in a saree.

Mr Peter gets stunned seeing Nina (Mr Peter’s wife), he praises her beauty and invites her for dinner.

However, Imlie gives Mr Peter a lesson on Indian values which describes the importance of a housewife while Atharva translates for her.

Meanwhile, Akash tries to stop Imlie but Rudra shuts him up.

Mr Peter gets infuriated when Imlie tells him about the value of servants as he does not even pick a spoon himself.

Atharva takes a stand for Imlie and exclaims that he would've taken a stand for a servant too but Imlie is his wife.

Imlie's eyes fill with proud tears while Rudra and Devika look at them with pride.

Nina praises Imlie and tells Rudra he is lucky to get Imlie as a daughter-in-law.

Nina takes a stand against Mr Peter and decides to leave him but Mr Peter begs her to stop.

Mr Peter urges Imlie to help and apologize for all his previous actions.

After everything gets settled, Mr Peter signs the contract with the Rana group industries and bids farewell.

The next morning, Anu calls Cheeni and urges her to act like Imlie to win Rana’s heart.

However, Cheeni tells Anu that she can not act like Imlie but she can make Rana's family hate Imlie.

At the same time, Imlie runs into Cheeni’s room and she cuts the call hurriedly.

Cheeni gives the idea of arranging a picnic for Rana's family for supporting her.

Happy about the picnic idea, Imlie decides to do a picnic in the house itself.

In Rudra’s room, Rudra and Devika praise Imlie while he is worried about Cheeni hampering Atharva and Imlie’s relationship.

Devika assures Rudra that the whole family will support Imlie to win against Cheeni’s evil schemes.

The living room is decorated with fairy lights and different picnic spots.

Shivani scolds Imlie for not asking anyone beforehand if they are interested in her picnic idea or not.

However, Atharva takes Imlie’s side and favours her idea of a picnic.

The whole family except Shivani supports Imlie and Atharva praises her for doing a good job in planning everything.

© Copyright tellybest.com, 2022, 2023. All Rights Reserved. Unauthorized use and/or duplication of any material from tellybest.com without written permission is strictly prohibited.
Cached Saved on: Saturday 26th of November 2022 12:01:05 AMCached Disp on: Wednesday 7th of December 2022 01:26:16 PM