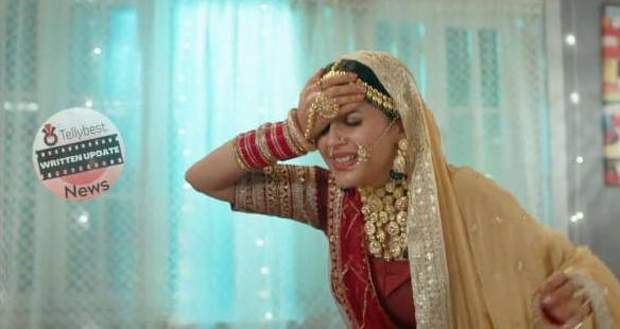 Today's Imlie 25th October 2022 episode starts with Cheeni going out of the room while Imlie gets dizzy and calls her name desperately.

Imlie tries to walk out of the room but falls on the floor unconscious.

Cheeni who was peeking from the door runs into the room closing the door hurriedly and run to Imlie’s unconscious body worriedly.

She apologizes to Imlie for her actions but expresses that this is her only chance to live a wealthy life.

At the same time, the baraat arrives and Cheeni passes a smile to Atharva from the window while he gives a tensed smile.

Sundar welcomes Atharva inside while all the Rathore ladies are waiting for him at the door.

Meethi puts tilak on his forehead and does his aarti and prays to Sita Maiyaa to compensate for their (Meethi and Her Daughter) struggle with Imlie’s (Imlie’s Daughter) happiness.

Anu stops him from entering and asks where Cheeni is but Kia handles the situation because she wants to get the marriage done as soon as possible.

In Imlie’s room, Cheeni wears the same clothes as Imlie and removes her footwear and wears it as she wants to replicate Imlie.

Meanwhile, Devika asks Atharva to leave his worries to his GS (GOD) and accept the situation.

In Imlie's room, Sundar and some bridesmaids knock on the door and Sundar reminds her to wear the bangle gifted by her in-laws.

Cheeni thinks this is her victory as she will marry Atharva instead of Imlie.

She messages Imlie’s friends that she is in the washroom and sends them away and walks out of the room while extending her dupatta on the face.

Later, the window opens due to storm and rain sprinkles on Imlie’s face and she gains consciousness.

Puzzled Imlie sees the baraat has arrived and tries to go out but the room is locked.

In a corridor, Cheeni hides Imlie's room key in a pot while Imlie is screaming for someone to open the door.

Imlie is wondering why no one came to wake her up as she is the bride.

In the hall, Kia and Akash are searching for Cheeni and get suspicious when they don't find her so they go to search for her.

On the other hand, Imlie jumps out of the window on a stack of mattresses to reach her wedding anyhow.

However, a glass shard pierces through her feet and she moans in pain.

Meanwhile, Kia misunderstands Cheeni as Imlie and tells her to remove her ghunghat to take a selfie.

© Copyright tellybest.com, 2022, 2023. All Rights Reserved. Unauthorized use and/or duplication of any material from tellybest.com without written permission is strictly prohibited.
Cached Saved on: Monday 21st of November 2022 08:27:14 AMCached Disp on: Saturday 10th of December 2022 02:11:07 PM