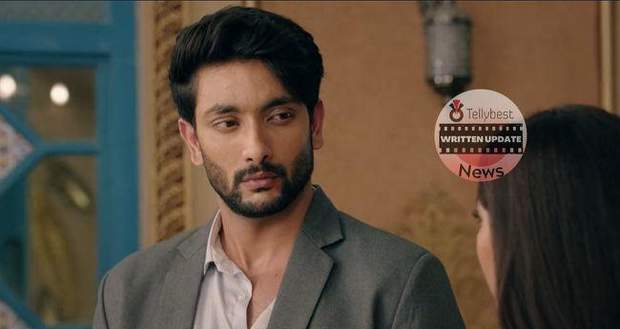 Meanwhile, Jaggu and Cheeni descend the stairs in Kanha costumes.

Narmada takes both Jaggu and Cheeni to the swing lovingly.

Cheeni requests Imlie to bring her Hero (Aryan) but Imlie refuses her directly.

Narmada requests Imlie to bring Aryan from his room.

Seeing Imlie going to Aryan’s room Malini glares at her and thinks about her friends reaching the Rathore house and putting her plan in motion.

Meanwhile, Imlie barges into the Aryan room and gets shocked to see that Aryan is not wearing any trousers.

Imlie blames Aryan for not locking the door while he accuses her of not knocking.

Aryan stops Imlie from going out of the room and requests her to close and lock the door.

Suspicious Imlie closes and locks the door and Aryan stutteringly starts to talk.

He says he wants Imlie to do something for him that no one has ever done for him.

Imlie's eyes get wide hearing Aryan’s words and scream at him for his shameful request.

Confused Aryan blurts out he wants Imlie to put the Nada (drawstring) in his trousers.

Imlie takes a sigh of relief and takes the Nada and trousers from Aryan while he realises the wrong meaning of his words.

Imlie turns around and asks Aryan what he is trying to do.

Panicky Aryan explains he doesn’t like the coconut smell on her hair.

At the same time, Malini starts to knock on Aryan’s door furiously.

Imlie gives Aryan his trouser and after wearing the trouser he opens the door.

Fuming with anger, Malini again calls her group of friends and orders them to come early.

Meanwhile, the Janmashtami celebration starts with the whole family dancing to the song “Radha”.

Malini tries to make her Ladoo Gopal fall but Cheeni runs towards the idol and picks it up saving it from falling.

Meanwhile, Malini’s friends gather around Cheeni and Malini gives her friends a thumbs up.

Seeing Cheeni gone, Imlie gets worried and starts to find her.

Everyone starts to find Cheeni in panic while Aryan goes to check the CCTV footage.