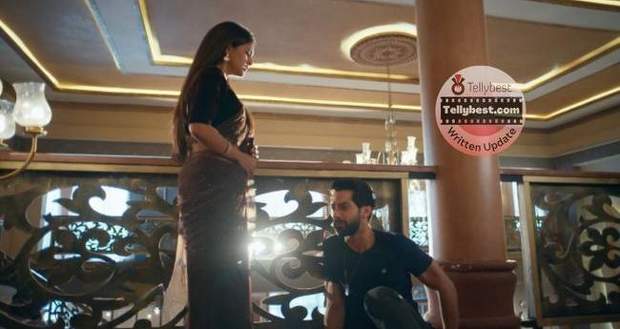 Today's Imlie 26th December 2022 episode starts with Imli telling Atharva that she's not angry at him since he is a stranger to her now.

Atharva tries to talk to her but she states that she's there only for Rudra and leaves.

Meanwhile, Shivani and Keya are talking wrong about Imlie while Devika shuts them up with her words.

Just then, the doctor comes there and informs them about Rudra's condition.

He tells Rudra to be careful since he has a high risk of heart attack and tells him to not take the stress and be happy as much as possible.

Later, Devika tries to feed Rudra but he refuses and looks around the room until his eyes land on Imlie.

He points at Imlie and tells her to feed him and take care of him.

Further, Imlie scolds Rudra for not taking his medicines and tells him that she has put a spy in the house who tells her everything.

They both get emotional as Rudra tells her to stay back.

Imlie says that she has to leave when she sees someone and tells Rudra that she will be back.

Later, Devika is praising Imlie while Shivani taunts Imlie and tells her that she has to stay and take care of Rudra.

Meanwhile, Rudra's condition worsens as Imlie is walking towards the exit door.

Just then, Aakash and Ginni go to Rudra's room and shout for the doctor while Imlie and the family members rush to see him.

The doctor makes him normal again and tells the family to come outside while Imlie stays by Rudra's side.

The doctor tells the family members that Rudra's condition is critical and that the attack happened because of their arguments.

As the doctor leaves, Shivani argues that Imlie has to stay for Rudra's sake while Devika states that Imlie won't suffer because of them anymore.

Devika orders everyone that no one will stop Imlie as they have lost the right to do so.

Later, Imlie is talking to a dietician on call when she sees Atharva looking lonely and goes to him.

Atharva hits his hand on the pillar as he says that no one is with him.

Atharva sobs as he falls to the ground and says that he lost his family, his love, and his best friend because of his mistake.

Imlie tries to console Atharva while he holds her hand and asks her if she will stay with him.

Imlie stands up abruptly while Atharva begs her to not go as Rudra loves her as a daughter very much.

She stands conflicted while Atharva tells her that Rudra at least deserves his daughter's support.

© Copyright tellybest.com, 2022, 2023. All Rights Reserved. Unauthorized use and/or duplication of any material from tellybest.com without written permission is strictly prohibited.
Cached Saved on: Wednesday 25th of January 2023 08:52:43 AMCached Disp on: Monday 6th of February 2023 05:08:53 AM