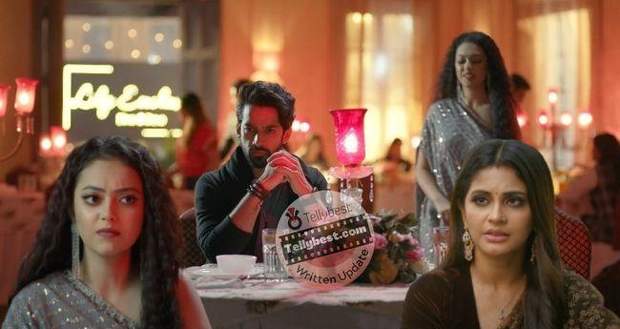 Atharva holds Imlie close to him as she still feels woozy.

Back at Rana House, everybody sees the news about Imlie exposing the currency scandal along with her husband, Atharva Rana.

Meanwhile, Chini grumbles and makes a face, stating Imlie still managed to become a heroine after ruining her date with Arto.

Akash, Keya, and Shivani are visibly unhappy about Imlie getting fame.

Devika chuckles and questions Atharva if he is trying to help Imlie or rebuke her more.

Just then, Rudra tells Sundar that Imlie sometimes jumps into fire, manages to deal with the goons, and now this.

Sundar chuckles and Arpita says that all these adventurous tactics are in Imlie's blood.

Later, Imlie is not able to find the ointments for her burning and Atharva comes and gives them to her.

Atharva says he kept all the medicine with her since she forgets to take them.

Imlie applies the ointment on her steamed face and then tries to apply it on her back but fails.

Atharva purses her lips and asks Imlie if he can help her.

Imlie quiets down when Atharva lets her know that she must give him a chance.

The wind rustles through their window as Imlie sits on the bed and shows her back to Atharva who takes his time to apply the ointment for her burning.

A romantic moment is formed between them with no words exchanged as Chini watches them from afar.

Cheeni almost barges in to ruin Atharva & Imlie's soft moment but Rupy grabs her hand along with Arpita.

When Rupy asks her, what she was doing, Cheeni says she just wanted to help them.

Arpita savagely tells Chini that Atharva and Imlie do not need her help at all.

At night, Chini comes to taunt Imlie that she managed to ruin her date with Arto and in the end, still gained fame.

Imlie gets exasperated and tells Cheeni that she didn't fight with the goons and got burned in the steaming room just because she wanted to ruin their date.

However, Chini's words form a deep impact on Imlie's mind.

The next morning, Imlie books a table for two for Atharva and Chini.

The whole Rana House gets elated as they think Imlie & Atharva are going on a date, specially Devika.

Imlie plays along as she doesn't want to break their heart but tells Atharva that she did it for him & Chini.

Atharva gets furious and asks Imlie why she is doing all this since he doesn't want to meet Chini now.

Atharva begs her to make him come out of this confusion since he has had enough of Chini's drama but Imlie walks away with a beating heart, telling him that it is his and Cheeni's life.