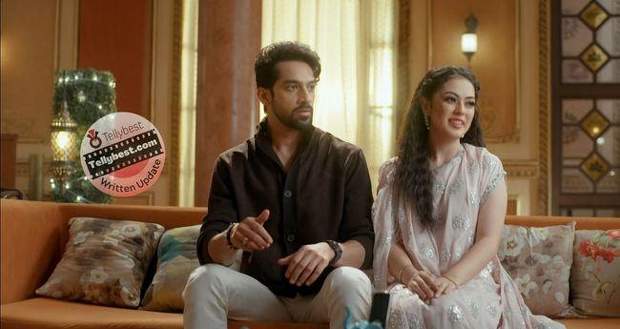 Today's Imlie 26th November 2022 episode starts with Cheeni trying to take a picture such that Atharva is in the background while Devika and Rudra tell the family that it is time for a photo shoot.

Rudra makes everyone gather and tells Cheeni to get ready since is better now.

However, Cheeni acts as getting sick again and says that she feels weak.

Imlie distracts the family members to play with a pair of the couple and tells them that the couple will have to keep the balloon in the air as much as possible.

Cheeni cannot bear to see the newlywed couple playing with each other happily and lights one of the helium gas-filled balloons with the lighter.

The balloon causes a chain reaction and the side of the hotel starts burning as Cheeni gets trapped in the fire.

Atharva saves her while the family hears Devika's shouts and gets shocked.

Imlie runs out of the house and Shivani gets angry thinking that she left to save herself.

However, Imlie returns with a water hose and puts out the fire while the family rushes to save Devika.

On the other hand, at the Rathod house, Sundar, Arpita, and Rupali get happy seeing the pictures of Imlie making her in-laws play the balloon game reminiscent of the past times.

Meanwhile, Rupali thinks that Cheeni is surely playing some game and tells Arpita and Sundar that they should bring Cheeni back home.

Afterward, Rudra angrily asks how the fire happened and wonders who is responsible for it.

The family members start blaming Imlie since she is the one who prepared for everything.

However, Imlie reasons that she did not ask for the helium balloons and stands by her statement.

Rudra calls the shopkeeper and asks him who ordered the balloons.

However, the shopkeeper reveals that there were two calls and that too from different people who changed the initial order of balloons to helium balloons.

In the end, Atharva asks the shopkeeper if he can identify the voices and calls him home while recording the voices of all the family members.

Cheeni gets worried hoping that she does not get caught while Imlie wishes to find out who made the mistake.

However, the shopkeeper selects Imlie's voice recording and states that she called the second time to order the helium balloons.

Imlie gets shocked while Cheeni smirks thinking that the plan worked in her favor.

© Copyright tellybest.com, 2022, 2023. All Rights Reserved. Unauthorized use and/or duplication of any material from tellybest.com without written permission is strictly prohibited.
Cached Saved on: Saturday 26th of November 2022 11:30:29 PMCached Disp on: Tuesday 6th of December 2022 02:10:45 PM