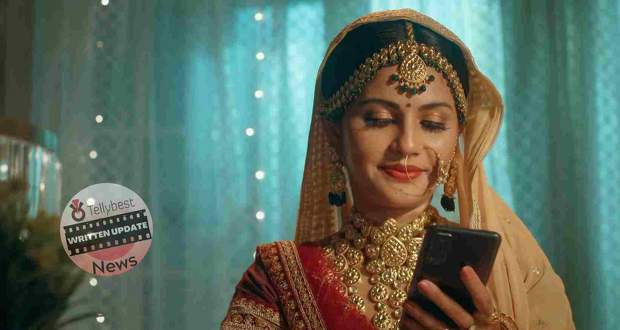 Anu takes Cheeni with her after telling Kia that they need to go to the temple for a ritual while Kia looks at them suspiciously.

On the other hand, Rudra sees the blood stains on the floor and gets suspicious of someone roaming barefoot.

Somewhere in a corridor, Kia meets Imlie and checks her identity by removing her ghunghat and asks why did she come back as she was supposed to go to the temple.

Imlie lies thinking that they might misunderstand her while Devika and Shivani interrupt them and meet Imlie happily.

Later, Cheeni and Atharva enter the temple and hug tightly.

Atharva feels guilty but Cheeni assures him and he concludes that this is what god wants.

Both Atharva and Cheeni turn to pray to god while Imlie enters and stands beside him unaware of Cheeni’s presence.

Cheeni tells god that today she will compensate for living all her life like an outsider in Rathore's house by marrying Atharva and playing with his money.

After opening their eyes, Cheeni is not there and Atharva misunderstands Imlie and Cheeni.

Meanwhile, Anu sees Imlie’s face in the mirror of aarti thali and gets shocked when she doesn’t find Cheeni anywhere.

Somewhere outside the Rathore house, two men are dragging Cheeni into a basement while she is screaming at them to leave them.

Rudra comes out and confronts Cheeni for replacing Imlie as Atharva’s wife.

He compares Imlie to a moon and Cheeni to a shadow of the moon.

However, Cheeni blames Atharva for being a partner in her plan and declares to Rudra that he cannot separate them.

Surprisingly, Rudra agrees to Cheeni's wishes and says Atharva is hers but not Atharva Rana.

He mocks her saying they (Atharva and Cheeni) will only get his blessing and nothing else and declares that Atharav will never become his heir.

In the mandap, Meethi prays to Sita Maiyaa for Imlie’s upcoming life and the Rathore family gets emotional recalling AryLie.

Sundar comments that her lizard (Imlie) is sitting with Sita Maaiya and Rupi cries saying that she would have beaten him with her elbow if she was alive.

Everyone cries and Narmada breaks down the barriers of her evilness and shed tears.

The Rathore family consoles Narmada but she goes away to calm her down.

In the basement, Rudra tells Cheeni about Atharva's mentality of living a luxury-free life as he values love over money.

He gives her a coin as a shagun and blesses them to be happy with the coin.

Rudra signals his men and they open two suitcases of money and offer Cheeni the money in return for not marrying Atharva.

In the mandap, Atharva and Imlie stand up to take pheras and Atharva confesses his love but suddenly a drunk guest fires a gun in the air.

Atharva holds his hand and puts the gun down while everyone is scared.