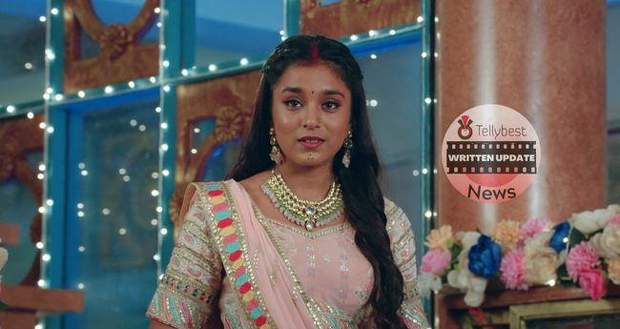 Meanwhile, Anu exclaims Malini’s Ladoo Gopal is missing and accuses Cheeni of stealing it and running away to sell it.

Imlie screams at Mrs Chaturvedi to shut her mouth.

Meanwhile, Malini screams at Imlie to not scream at her mother.

However, Imlie retaliates saying Cheeni is only a 5 years old girl who doesn't know the difference between gold and silver.

Just then, Aryan enters the hall and shows Imlie the CCTV footage.

However, Narmada stops the commotion saying the people who took Cheeni out of the house are not their guests.

Aryan calls the police and threatens Anu to not bad mouth his Sugar.

Imlie falls on the floor from worry while Aryan assures her that he will find Cheeni at the earliest.

On the other hand, Malini’s friends take Cheeni to a basement and bind her hands.

Cheeni talks to the goon saying she has a Laddo in her pocket and bargains with him to open her hands for Ladoo in return.

The goon opens the rope while Cheeni pushes him and runs cheekily holding the idol in her hands.

Meanwhile, the police put the case on hold for 24 hours.

At the same time, Malini happily pickups up the call expecting good news but finds out the bad news of Cheeni running away.

Seeing Malini’s face in distress Imlie grabs her phone but Malini lies saying she was watching the CCTV footage again.

However, Imlie notices something and runs to Aryan and reveals that Cheeni has been abducted as someone picked her up by force.

Meanwhile, Imlie joins Aryan in the search while Cheeni is running for her life.

The goons are searching for Cheeni while she is hiding from them behind the wall.

Afterwards, Imlie remembers that Cheeni always has her phone with her.

Taking Aryan’s phone Imlie finds out Aryan has not saved her number with her nickname "Junglee...".

However, Aryan says he doesn’t want to remember her from that nickname.

Meanwhile, Cheeni remembers she has Imlie’s phone and calls her.

However, the goons grab the phone from Cheeni’s hand and take her out of the location while throwing the phone on the sidewalk.

Meanwhile, unaware Aryan and Imlie pass the car in which Cheeni is abducted by goons.